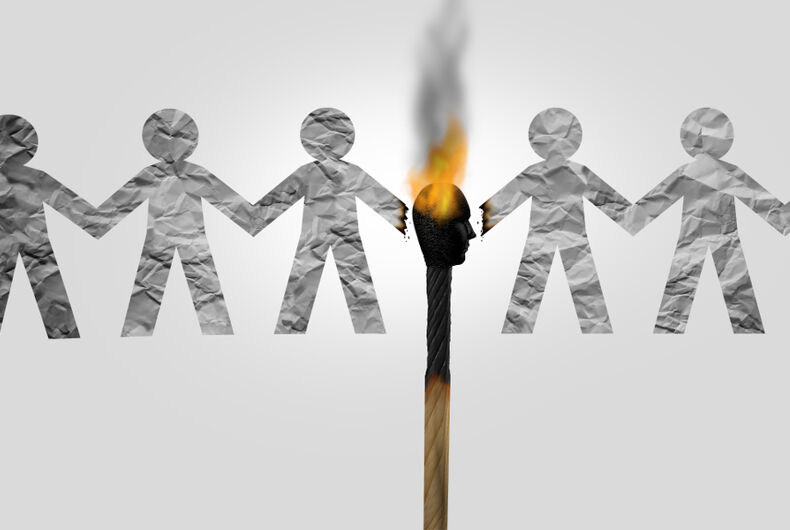 President-elect Joe Biden will be sworn into office on January 20th, and the MAGA mentality will soon be a fading memory from the political desert America has navigated for the last four years. We hope.

Born and raised in Texas, I have family members who have adopted the lies of dangerous media outlets and who have fallen victim to their brainwashing tactics. From Q-Anon conspiracy theories to baseless allegations of election fraud, my maskless loved ones have chugged the Trump Kool-Aid.

Related: What is the United States of America now?

President Donald Trump’s continued influence over the GOP and his supporters once he leaves office is unclear. But for those acolytes enraged over his second impeachment, and who believed they could storm the U.S. Capitol and successfully disrupt the peaceful transfer of power to his duly elected successor, the grieving process could be potentially catastrophic for the healing of America.

As the only gay Democrat in my immediate family, I have learned to normalize the heteronormative conventions and archaic gender roles espoused by my loved ones. I have acquired tolerance for them despite the fact that their political affiliations rarely carry any regard for my own civil rights or the civil rights of other minority groups. But towards the end of Trump’s presidency, as his feckless actions became increasingly harmful to our democracy, my oft suppressed progressive opinions around family gatherings became more pointed and unreserved.

The Black Lives Matter protests challenged me to confront my own white privilege and complacency, and in doing so, I had to face the hard reality that certain members of my family – some of whom have been my heroes from the onset of my existence – are text-book white supremacists.

I could no longer co-sign their inability and disinterest in understanding the volatile effects of systemic racism, and I lost the unconscionable ability to shrug at the oppressive nature of such issues as I had for years. A casual discussion inspired by baseline principles of equality that crescendoes into a screaming debate around people of color being disproportionately targeted by police officers no longer warrants a complicit lets-agree-to-disagree resolution.

Several members of my family had a Parler account, the app that functioned as an echo chamber for right-wing idealogues until it was suspended by Apple and Google and their webhost dropped them. The app was used to incite violence at the insurrectionist riot at the Capitol ahead of President-elect Joe Biden’s inauguration. To the upward of a million members strategizing in the far-right digital war room, the suspension was a direct violation of their First Amendment rights – even if business transactions aren’t covered in the Constitution.

Extremist threats of violence must be treated as a national security threat, no different than an Al-Qaeda terrorist organization breaching our social media networks. This time, it is Americans terrorizing other Americans, but that doesn’t dilute the meaning of the word, “terrorism.”

After last Wednesday’s deadly attack, a video of Trump insurrectionist Ashli Babbitt being shot and killed by Capitol Police went viral. Some on the left vocalized a lack of compassion with “she deserved it,” but she was there on the directives of the President himself.

A video that Babbit posted to her social media account hours before her death indicates that she felt confident in her planned insurrection thanks to the president’s words of encouragement – and she lost her life as a result of it.

Judging her actions in a vacuum is easy, but as an avid supporter of Hillary Clinton and as someone who carried unwavering trust in her leadership, if she had said the election was stolen in 2016, I can’t say I wouldn’t believe it. Nor can I say I wouldn’t have fought in some capacity for that injustice to our democracy. But Hillary Clinton called Donald Trump to concede on election night and, as a result, she maintained the integrity I had come to trust since the beginning of her campaign.

She didn’t lie to her followers. She didn’t try to divide the country – and untold families. She tried to unite.

Tensions with my family are high, and I haven’t spoken to them much in weeks. The tension between us is no longer about politics, but principles of humanity. In a country divided, and amid a global pandemic, I know my story isn’t unique.

White nationalist groups have always lived among us. Now, we just know who they are because Trump has given them the confidence to announce themselves. Our divisions are rooted more deeply in the stakes of the relationships we choose to keep knowing that we’ve worked, loved, and shared meals with them our entire lives.

Strengthening our country and uniting with humanity will be a challenge in the coming years, regardless of partisan differences. White supremacy and racism have no place on the soil of a multi-cultural and diverse America, and that should be true regardless of whether we identify as Republican, Democrat, or Independent.

Once the grieving process is over for the “patriotic” base, and once those who have engaged in violence are held accountable, a fractured Republican Party must work with President Joe Biden and Kamala Harris in reuniting the American people regardless of race, gender, sexuality, religion, or political affiliations.

True healing can only happen if we base it on the strength of equality for every American.

Dustyn Gulledge holds a BA in Creative Writing from the New School University and an MFA in Acting from A.R.T. at Harvard. He is a published poet, op-ed writer, Broadway actor, as well as a working television actor living in Los Angeles.

Mississippi may ban trans people under 21 from receiving healthcare