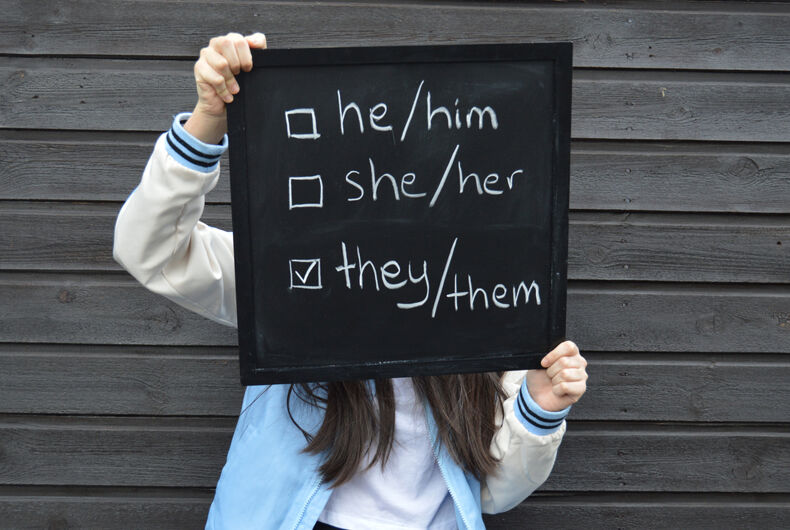 Imagine going to work and never being referenced by name. Or worse, being called the wrong name even when you try to correct someone. Then, one day, your manager and colleagues begin addressing you by your real name.

Is your presence and existence at work new? Or is it just the ability of your coworkers to truly recognize you?

Related: The country’s first out non-binary state legislator is also Muslim & they have a lot of work to do

Many trans and nonbinary people are having this experience in the workplace these days. Nonbinary people are not “new”, but the ways in which workplaces are being more respectful and supportive are. We have been showing up and contributing like everyone else, yet only in recent years have many companies pushed forth educational initiatives to encourage employees to broaden their understanding of the names and pronouns that their nonbinary colleagues use.

In my job as Associate Director of Global Initiatives at Out & Equal, I often come across the misconception, sometimes well-intentioned yet uniformed, that nonbinary gender identities are either new or a trend of the special “snowflake” millennials and Gen Z-ers. Credit where credit is due: it is true that younger generations, working off the progress of generations before them, have led the charge to create more space to discover, reclaim and explore the limitlessness of gender and conceptualize new language to express it. However, this does not mean that gender outside the binary itself is new.

Even if I could not name it, I understood my gender as nonbinary before I understood double-digit math. I distinctly remember the wave of panic that would rush through my body when my kindergarten teacher would ask us to split into groups for class activities. “Boys on this side, girls on this side.” I couldn’t choose. I did not feel particularly called to either side. Can I just sit here in the middle?

I wanted to raise my hand and propose we divide ourselves up by shirt color instead. Alas, I knew that the teacher and everyone else expected me to walk over to the girls’ group. So, halfheartedly, I did. And I did that every time I was asked until I eventually learned to stop questioning it.

So, I know from personal experience that nonbinary gender has existed since at least 1988. But if you don’t believe 5-year-old me, just ask the ancient Egyptians. You see, I have had to make myself somewhat of an amateur historian to legitimize the rich and beautiful existence of trans and nonbinary folks throughout world history.

As it turns out, the advancement toward becoming more gender-inclusive has its roots just as much in the decolonization movement as it does the LGBTQ movement. The very idea of gender as strictly “man” or “woman” is very much a colonial Western concept. When we lift the binary veil, we find documented evidence of gender fluidity dating from 2000-1800 BCE to pre-16th century societies around the world.

Ancient Egyptian hieroglyphics clearly depict three genders – men, women, and those who were previously thought to be eunuchs. Now, however, given the scant evidence of castration, scholars believe that the third hieroglyphic is more likely to be representative of a third gender. Fast forward to societies of the pre-1500’s and we see countless examples of life outside the binary.

To name only a few: the Bugis people of South Sulawesi, Indonesia recognize five genders, and those identifying as Muxe in the Zapotec community of Oaxaca, Mexico are recognized and celebrated as being an integral part of their society. The cases of people existing peacefully and happily outside the binary are abundant, fully accepted by their communities, and often playing specific and important roles.

Unfortunately, the laws, practices, and cultural norms imposed upon Indigenous peoples everywhere by European colonizers resulted in the persecution, marginalization, and killing of people who identified this way in what was essentially centuries of Indigenous queer genocide, in many cases leaving them nearly erased. What we see today is nothing new, but rather a world that has begun to reawaken, recreate safe spaces, and reclaim.

Companies are focused now more than ever on ensuring a workplace culture where their nonbinary colleagues feel a true sense of belonging and can grow and thrive within the organization. In 2019, Merriam-Webster officially updated the definition of “they” to include its usage as a singular pronoun for a nonbinary person and also named “they” as its Word of the Year as searches rose by 313%. People all over the world are reimagining their language to be more gender-inclusive. Just last week as the Biden administration was sworn in, the White House updated their online contact form to include they/them pronouns.

So why is it so important to recognize this history of over 4,000 years of documented existence?

When people first learn of nonbinary identities, their first reaction may be to question why people would suddenly be identifying as anything other than a man or a woman. We tend to be resistant to change that we do not understand.

Shedding light on the long-standing history of these identities underscores the origins of its erasure, and thus why someone might be hearing of this for the first time. The perceived change is not the spontaneous invention of a new gender identity, but rather a slow and steady change in our society to recognize, to make space for, and to respect people who have always been here.