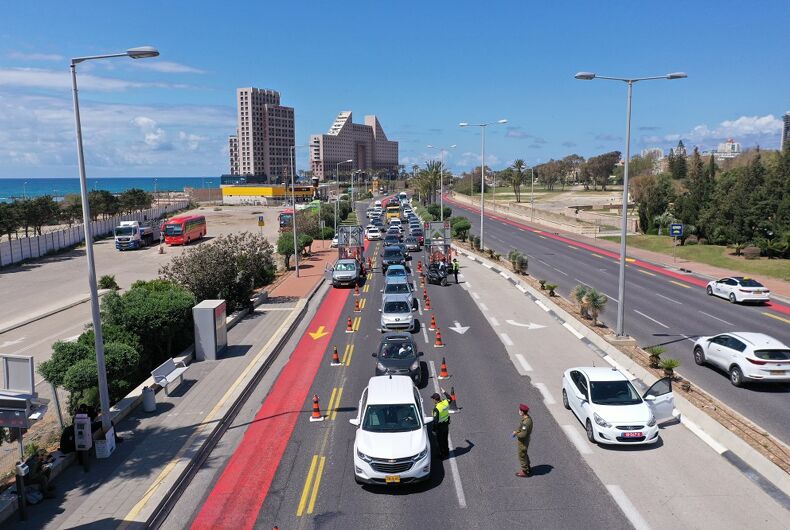 A gay couple is speaking out after they got a fine in part because police officers couldn’t believe that two men could be in a relationship.

Yigal Ohayon and Shai-El Atias of Haifa, Israel were returning home on January 23 after helping Ohayon’s elderly mother take care of herself. Israel is currently in lockdown and people aren’t allowed to go more than one kilometer from their homes, but taking care of a family member is an exception.

“I can’t take care of her on my own,” Ohayon told N12 News, so his partner Atias came with him to help.

The men were stopped by police at a checkpoint and Ohayon tried to explain that they were taking care of his mother. The officers didn’t accuse him of lying about going to the mother’s home but instead didn’t believe that the men could actually be a couple.

“After we were asked why we were together, we said that we were a couple,” Ohayon recounted, according to the Jerusalem Post‘s translation. “They responded: ‘What do you mean?’ and we asked if he’d never heard of gay men and if he was dismissing the fact that we’re a couple.”

“So the second officer joined and they had a conversation between themselves about us…. The officer said ‘No way. There’s no such thing. It doesn’t make sense that there’s such a thing.'”

He said that he even offered to call his mother so that she could back up their story, but to no avail.

“He wasn’t even looking us in the eyes,” Ohayon said. “We called her but he ignored us and didn’t listen to a word we said.”

“After five years together he has dismissed our relationship and who we are,” he said. “Just because he’s a homophobe we got two fines. I’m not going to give up and I’ll go all the way with this cop’s behavior. It’s not that all cops are homophobic, but it’s time to put an end to racism and homophobia, certainly when it comes to law enforcement.”

“He spoke to me contemptuously and was not ashamed to hide it. For years I have not encountered such a level of homophobia,” said Ohayon.

The couple was later stopped at another checkpoint, where the officer accepted their reason and let them go.

Ohad Hezki of the Agudah, an Israeli LGBTQ organization, is calling on police to release body camera footage and documentation of the encounter.

“We stand by Shai-El and Yigal and anyone who has experienced LGBTQphobia,” Hezki said in a statement. “We will not tolerate any harm, discrimination or hatred on the part of police officers, whose job is to be an address for discrimination against members of the LGBTQ+ community, not create it.”

“Hooded homophobe” threatens to kill victim & punches him in the face

Gay couple nearly killed by man shouting “fa***ts.” But he wasn’t charged with a hate crime.