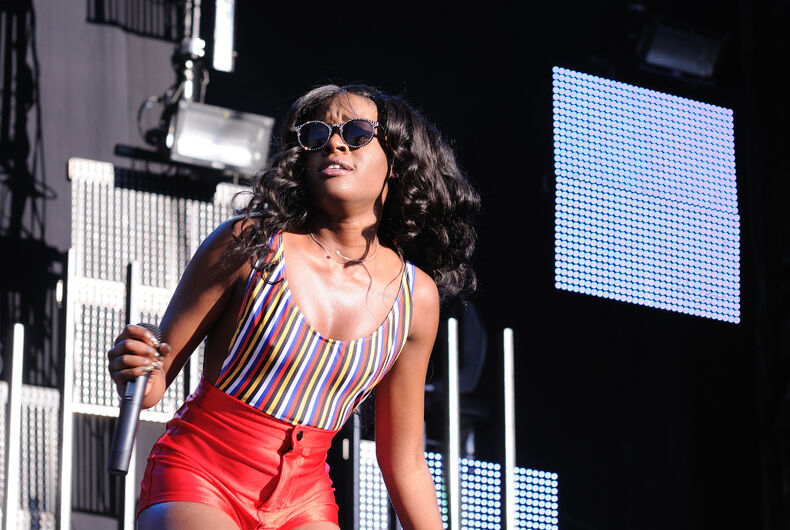 Out musician Azealia Banks has shocked her fans by posting what appears to be a video of her digging up her dead cat and eating it on Instagram.

“The cat is in the bag!” she said during the video.

Banks is no stranger to controversy. She is out as bisexual, but she has viciously attacked transgender people and gay men in the past, insulting people who transition and using the slur “faggot” when she gets angry.

But even fans who stuck by the “212” singer through her homophobia and transphobia are shocked now. Banks posted a video that appeared to be a tribute to her recently deceased cat with the caption “Lucifer 2009 – 2020. My Dear kitty. Thank you for everything. A legend. An icon. Forever a serval serve.”

In an Instagram Story which has since been taken down, she appears to be recording an unidentified person as they dig the cat up, according to The Sun. Banks is laughing in the background as she made up a rap about it on the spot.

Then she appears to boil the cat in a big pot.

Another post shows Banks standing by the big pot, and another one shows the cat’s head on her wall.

“My stomach is in my mouth right now. She should really speak to a psychologist,” wrote one commenter.

“this is one of the first tweets i saw this morning and i think I’m already good to log off,” wrote another.

“Girl why are you making cat soup please?” wrote yet another commenter with crying emojis.

Several other commenters said that she should be banned from Instagram – she has been banned from social media before for her hate speech – and still others wondered if it was an elaborate prank.

In 2016, Banks posted a video to Instagram where she claimed to have practiced witchcraft for three years and then proceeded to clean a room where she practiced animal sacrifices. At least two dead chickens were visible in the video, according to People.

“The amount of crap that’s about to come off my floor right now guys? Oh my God,” she said in that video. “You know I got to scrape all this shit up. I’ve got my sandblaster, and my goggles — it’s about to go down.”

That same year, Banks endorsed Donald Trump, saying, “Trying to be all PC… is not good for culture.”

She has also called multiple people – both online and in real life – “faggot,” and promised two years ago to stop using that slur.

In 2020, she went on a Twitter rant against transgender equality where she wrote: “CANCEL ALL THESE DUMBASS LUXURY TRANSGENDER HEALTHCARE ‘RIGHTS’ AND REDIRECT THE CASTRATION FUNDS TO THE LATINO FARMERS WORKING TO ACTUALLY FEED ANY OF US THROUGH THIS CRISIS.”