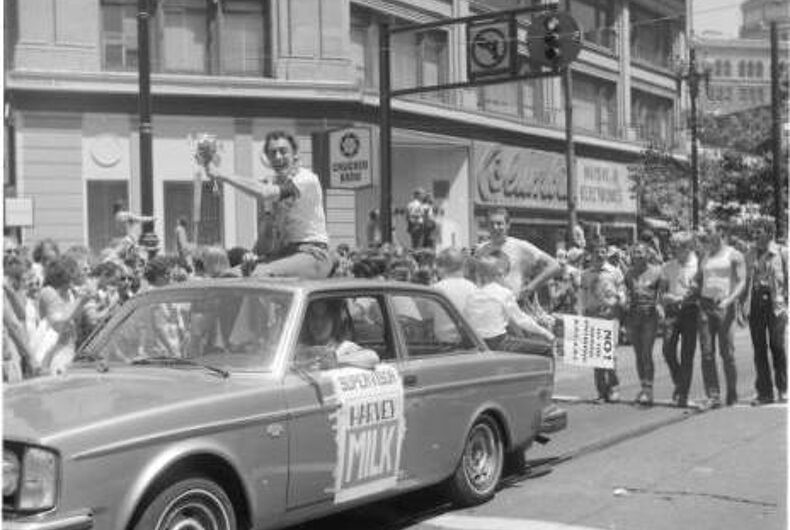 Harvey Milk rides atop a car in the 1978 San Francisco Pride parade. Milk, “the Mayor of Castro Street,” had been elected to the city’s board of supervisors in November 1977.Photo: Pat Rocco / ONE Archives Foundation

Was there ever been a more exciting time to come out of the closet than 1970s San Francisco?

There was Harvey Milk’s rise to power, Sylvester’s seductive disco music, the thriving gay bar and leather scene, Armistead Maupin’s Tales of the City, the invention of the rainbow flag, the first Pride — everywhere you looked there was queer revolution and power and pride. And there was also Phyllis.

Yes, Phyllis. A short-lived spinoff of The Mary Tyler Moore Show, Cloris Leachman played a recent widow who moved from Minneapolis to San Francisco in the mid-70s, which just happened to be a time when the city was going through overwhelming gay upheaval — and on one 1976 episode, she ran right into queer liberation.

The episode starts with Phyllis sitting down with her boyfriend, Scott, to ask why he isn’t more passionate with her. It’s time for Scott to confess his secret, which is that he’s gay. Phyllis reacts well — “that’s wonderful!” she shrieks, relieved that there’s nothing the matter with her. But then she realizes that Scott’s suffering in the closet, and she starts coaching him to come out. “These are the 1970s,” she says. “being gay isn’t the kind of thing you need to hide.”

She’s not wrong that life for queer people — and especially gay men — changed a lot in the 1970s, starting with the de-listing of homosexuality as a mental illness just a few years earlier. But San Francisco was a particularly exciting place to come out as gay at the time.

For one thing, the Castro had just been solidified as the city’s gay neighborhood. A local musician named Sylvester was becoming an international star with the song “You Make Me Feel (Mighty Real).” There was a new avant-garde psychedelic gay theater troupe in town called The Cockettes that staged wild raunchy shows like Tinsel Tarts In A Hot Coma, or Journey to the Center of Uranus. There was also a huge proliferation of gay bars, like Twin Peaks — the first gay bar in the US to have big windows so you could see in, rather than everyone inside wanting to hide.

San Francisco in the 70s was exciting and chaotic and revolutionary and incredibly queer — and that’s before you even start talking about Harvey Milk.

Harvey’s famous today for being one of the first openly LGBTQ elected officials in the country. But back when this episode of Phyllis aired, he was just some guy with a camera store who kept running for office, and losing. But with every campaign, more people started noticing him and believing in him. Not just in him, but in the idea that outsiders might actually have a shot at gaining a voice if they all band together.

Harvey talked a lot about the importance of coming out. In fact, he used almost the exact same dialogue as Cloris Leachman’s character on Phyllis: “You’ll feel so much better.” Coming out was a big deal back then, in part because it meant taking on some amount of risk, but also because, as Harvey said, it was the only way to dispel the myths and lies and innuendo about gay people.

After a few bumps in the road, Scott finally takes the advice of Phyllis and Harvey, and comes out to his family. (But not before first telling them that he plans to marry Phyllis — whoops.)

Afterwards, he’s so relieved: “You’re looking at a man who just stepped out of prison,” he says. That’s a perfect way to describe coming out, on a personal level and a political level. After all, it’s called “liberation” for a reason.