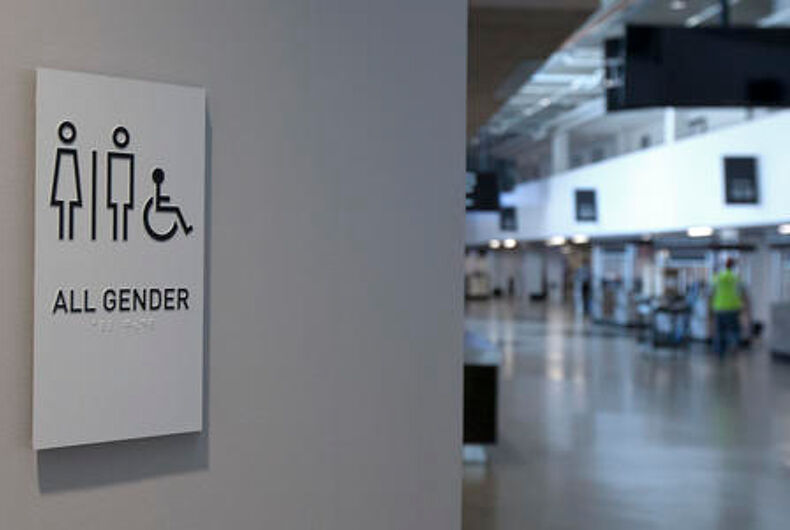 A sign marking an all-gender restroom is seen at the new Golden 1 Center in Sacramento, Calif. Photo: AP Photo/Rich Pedroncelli

The Supreme Court has declined to take up a case brought by Oregon parents who want to exclude transgender students from school locker rooms and restrooms. The parents demanded that trans students only use facilities that correspond with their sex at birth and not the gender with which they identify.

The court did not give a reason for turning away the appeal, but similar lawsuits have been dismissed by lower courts across the country. The decision to decline the case is a big win for transgender students.

Related: Joe Biden has the historic chance to do something about transphobia in America

The group of parents sued in 2017, arguing that it would embarrass their children if they had to use the same facilities as transgender peers. A lower court refused to block the policy and an appeals court upheld the ruling. The court ruled that the policy did not violate the student’s constitutional rights and had no cause to overturn nondiscrimination protections in federal law.

SCOTUS is conferencing this case today. Please send all prayers that they deny cert. This is the case arguing that it violates the constitutional rights of cis people to be in proximity to trans people. https://t.co/MYPjfoaghw

🏛️NEW: Scotus denies review in Parents for Privacy v. Barr. The case involved an effort by Oregon parents to challenge public school policies allowing transgender students to use bathrooms that match their gender identity. Here's how the parents framed the issue and stakes👇 pic.twitter.com/m15XdFLLJm

BREAKING: The Supreme Court has refused to take up a challenge to school policies that support transgender students. School districts should continue to allow trans students to use the same restroom as their peers.