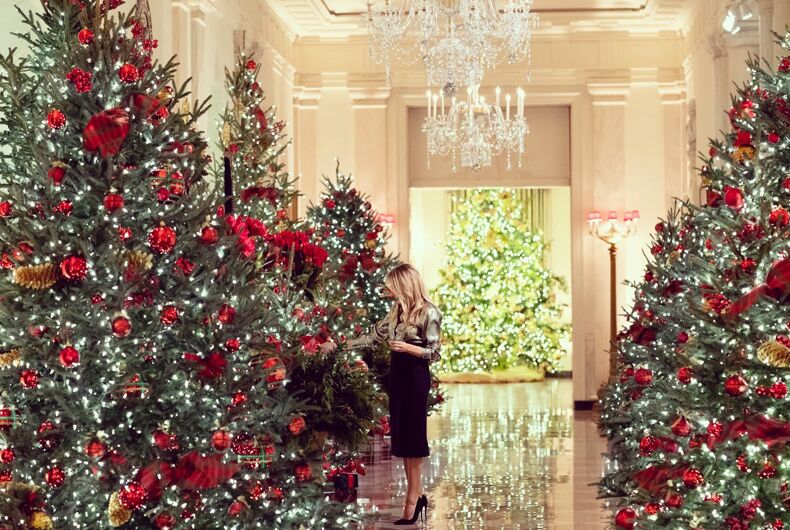 First Lady Melania Trump stirred controversy earlier this year when she was secretly recorded complaining to a friend about her duty to organize the White House’s holiday decorations. Trump unveiled this year’s display, featuring children’s handmade ornaments and her signature catchphrase “Be Best,” has the theme “America the Beautiful.”

While the White House social media department has obviously been busy scrubbing negative comments off of Facebook, Twitter has not been kind.

Related: Melania Trump wanted to light the White House with rainbow colors for Pride month. She got told no.

The traditional decorations are a far cry from 2018’s bright red trees that spawned comparisons to A Handmaid’s Tale.

“Over the past four years I have had the honor to travel to some of our nation’s most beautiful landmarks and meet some of the most compassionate and patriotic American citizens,” Trump said in a press release announcing the unveiling. “From coast to coast, the bond that all American’s share is an appreciation for our traditions, values, and history, which were the inspiration behind the decorations this year.”

During this special time of the year, I am delighted to share “America the Beautiful” and pay tribute to the majesty of our great Nation. Together, we celebrate this land we are all proud to call home. #WHChristmas pic.twitter.com/fdZmB3rdXL

Melania Trump complained to Stephanie Winston Wolkoff, a former friend who wrote a tell-all book about her experiences inside the White House, that she didn’t want to do the official holiday decorations, but tradition demanded it. Then, when she did it, she complained that she got blowback for focusing on something trivial instead of stepping in to change government policy.

“I’m working my ass off with the Christmas stuff that, you know, who gives a fuck about Christmas stuff and decorations but I need to do it, right?” Trump said in the recording. “And then I do it, and I say I’m working on Christmas and planning for Christmas. And they say, ‘What about the children that are separated?’ Give me a fucking break.”

Twitter was not about to allow Trump to escape responsibility for her off-the-cuff remarks to a friend. Here’s a sample of tweets from users being their best.

Christmas is typically thought of as a time for family but every Christmas we are treated with photos of Melania Trump, walking alone beside her choice of WH Christmas decorations

Nothing says warmth and joy like black funeral urns. pic.twitter.com/efly9zZ9r7

Laverne Cox was the victim of an anti-transgender hate attack