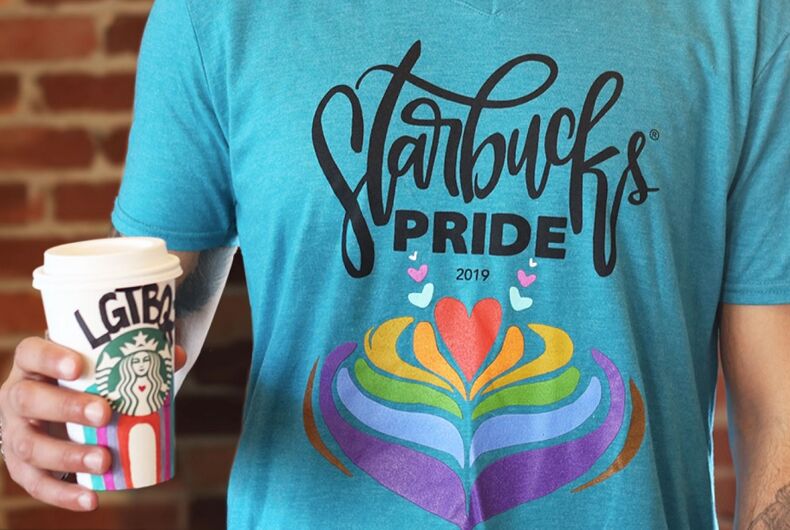 Starbucks barista Betsy Fresse is suing for religious discrimination after telling everyone at work that her LGBTQ-supportive coworkers “need Jesus.”

“All people need Jesus,” the Christian woman said, claiming that she was fired by Starbucks for refusing to wear a rainbow Pride month t-shirt.

Related: Christian Kroger employees sue for being forced to wear a heart on their uniform. They say it’s gay.

Fresse was working at a Starbucks in Glen Ridge, New Jersey in 2019. She said that she saw a box of rainbow Pride t-shirts in her manager’s office and asked her manager if she would have to wear one. She said he told her “No.”

According to Fresse, she was later contacted by Starbucks’s ethics and compliance helpline about her refusal to wear the shirt. She told them she didn’t want to wear it “because her religious beliefs prevented her from doing so.”

Her defense? “All people need Jesus.”

In a lawsuit filed with the U.S. District Court for the District of New Jersey, Fresse claims that she “holds no enmity toward individuals who ascribe to the LGBTQ lifestyle” but that she told her coworkers what she thinks of LGBTQ people “upon specific inquiry.”

She claims that Starbucks fired her for not wanting to wear the shirt, and she says that being forced to wear it as a condition of employment “would be tantamount to forced speech and inaccurately show her advocacy of a lifestyle in direct contradiction to her religious beliefs.”

“God created man and woman, that marriage is defined in the Bible as between one man and one woman only, and that any sexual activity which takes place outside of this context is contrary to her understanding of Biblical teaching,” her complaint says.

A spokesperson for Starbucks told NBC News that she was not required to wear the shirt and that, other than the green apron, she could wear whatever she wanted.

“Starbucks does not discriminate on the basis of gender, race, religion or sexual orientation,” the spokesperson said, calling the lawsuit “without merit.”