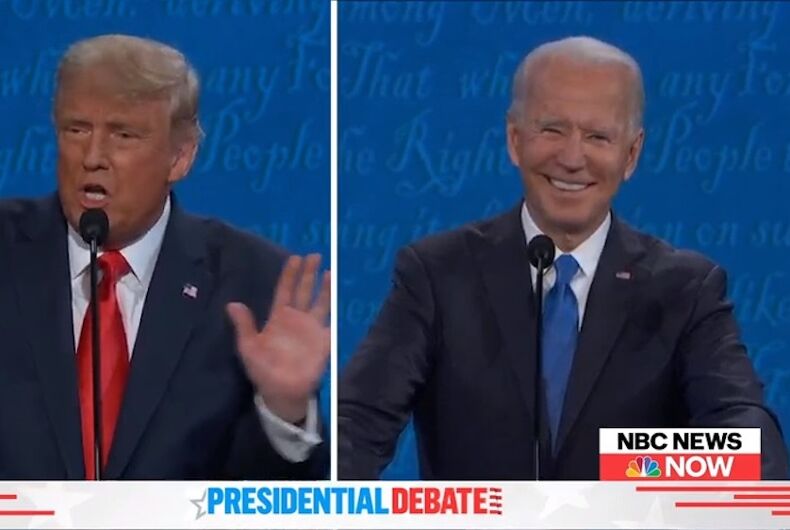 Is a quasi-disciplined Donald Trump any less crazy than an out-of-control Donald Trump? We got to see the difference during the second and final presidential debate last night.

The short answer is, of course not.

Only Trump could turn a question about climate change into an extended riff on “little, tiny, small windows.” Or tell a black moderator that he was the least racist person in the room. Or respond “Good” to a complaint from Joe Biden that the U.S. can’t find the parents of 500 plus children forcibly separated from their families at the border.

Failing in the polls thanks to his disastrous handling of the pandemic, Trump needed a gamechanger. He didn’t get it.

Trump may have been more focused this time around, but Biden didn’t deliver the disastrous gaffe that Trump hoped for. Biden was also sharper this time around. He went on the offensive against Trump, taking him to task for his taxes and secret China bank account. He spoke directly to the camera, reminding viewers that the election was about character.

Trump tried mightily to portray Biden as a corrupt politician, accusing him of getting payoffs from Russia. (The irony of that charge!) It was a page from Trump’s 2016 playbook, which worked against Hillary Clinton. But that was because the Clintons always skated a little close to the ethical line. No one has ever made that accusation against Biden.

Moreover, the Trump charges, which smack of Russian disinformation, are so convoluted that most viewers will find them impossible to follow.

Trump had a little more success claiming that Biden could have enacted the changes he’s seeking now, but failed. Biden swatted most of those charges away by simply pointing out that Trump was lying. Biden also scored points by admitting some past failures, including part of his 1990s tough on crime stand.

Notably missing from the debate–and from the previous debate and the vice presidential debate–was any mention of LGBTQ issues. With the exception of a question about transgender rights at Biden’s town hall last week, LGBTQ issues have been noticeably absent from the high-visibility events.

That’s a shame, because it would have been good to hear how Trump would have defended his wretched anti-LGBTQ policies. No doubt, the president would have lied about them, insisting that the community owes him a debt of gratitude.

But if Trump was willing to say he did more for the black community than Abraham Lincoln, to whom could he compare himself as the liberator of the LGBTQ population? We may have missed our only chance to hear a sitting president say he’s done more for us than anyone, including Judy Garland.