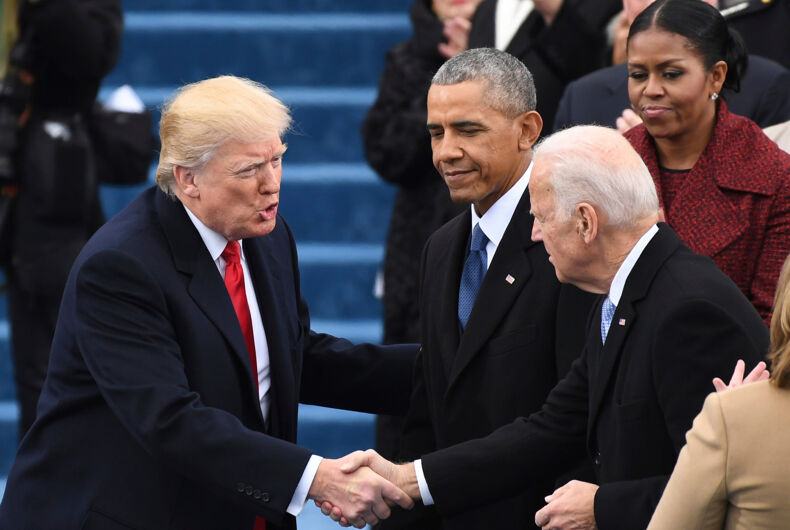 Under Obama, anti-equality legislation–including the Defense of Marriage Act and Don’t Ask, Don’t Tell–was overturned while a number of protections were also enacted to fight discrimination.

Despite this, gay Republicans have dubbed Trump “the most pro-gay president in American history.”

However, here are just a few of those Obama-era rulings that Trump and his administration have rescinded since he took office in 2016.

Obama (June 30, 2016): “Transgender Americans may serve openly and they can no longer be discharged or otherwise separated from the military just for being transgender.”

Trump (July 26, 2017): “The United States Government will not accept or allow transgender individuals to serve in any capacity in the U.S. Military.”

Trump (June 12, 2020): Under the Affordable Care Act, “the plain meaning of the word ‘sex’ [is] male or female and as determined by biology.”

Trump (Feb 22, 2017): The Departments of Justice and Education “will not rely on the views [previously] expressed.”

Trump (Oct 5, 2020): Trump’s public opposition to same-sex marriage traces back to 2000 in an interview for The Advocate where he states, “I think the institution of marriage should be between a man and a woman.” In a recent dissent in the case of Kim Davis, the former Kentucky county clerk who refused to issue same-sex marriage licenses, Supreme Court Justices Samuel Alito and Clarence Thomas stated that the court’s 2015 decision to legalize same-sex marriage “will continue to have ruinous consequences for religious liberty.” Trump’s administration did not comment on the dissent or Davis’ case.

In her confirmation hearings, Trump’s third supreme court appointee Amy Coney Barrett indicated that Loving v. Virginia, the 1968 decision striking down bans on interracial marriage, should be considered an established precedent. However, she refuses an opportunity to say the same of Obergefell, leaving the future of marriage equality before the conservative majority an open question.