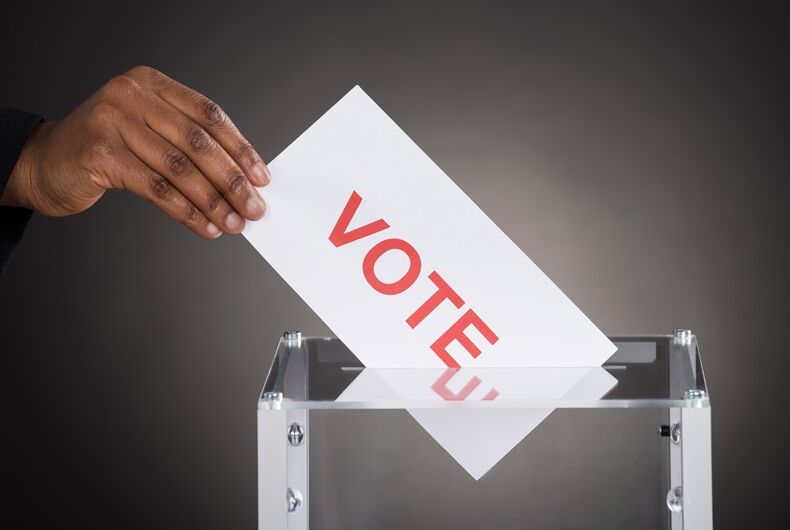 If you’re transgender, homeless, or formerly incarcerated, voting can be a challenge. But in 2020, as Republicans attempt to suppress the vote, it can be even harder.

But Ross Murray, the head of GLAAD’s Vote With Pride initiative, has a simple message for LGBTQ voters and allies who have yet to cast their vote: “You still can.”

“Time is running out,” he said. “Your friends, your family, your neighbors, they are out making their voices heard. People will not understand how important these issues are to the LGBTQ community until we make it known, and voting is one of the ways we do that, all of us together.”

“Voter ID laws are different in every single state in the country, which is what makes this really challenging for a national organization. We can’t say one thing.”

He urged people to double-check the voter ID laws in their state to know what is expected and how to get the backup documentation if any is needed to settle any potential challenges by poll workers or election judges.

“You can still get harassed at a polling station, and it’s hours before it closes and there is nothing else you can do. Bring the extra documentation with you even though you shouldn’t have to need it,” Murray explained. “And in a state that does have an ID law, bring as much extra documentation that can help support who you are and be able to at least do something like a provisional or an affidavit ballot.”

Murray added that even in states that do not have strict voter ID laws, transgender voters may experience challenges.

Your voter registration gender marker and name need to match your state ID. For 378,000 voting-eligible transgender people, that can make voting at the polls uncomfortable, and incongruous with their lived identity.

For those who are experiencing homelessness, it is possible to register with a shelter address. But that can create another challenge if they have since moved out of the temporary shelter.

Murray emphasized that voters need to be thinking not only about casting their ballot for president but also who they want to elect on the state and local levels.

“Those state and local laws actually have an even greater impact on LGBTQ people and their daily lives,” he said.

Based on large early voting numbers of young people, who Murray said are more likely to identify with the LGBTQ community, he is feeling optimistic about LGBTQ turnout in the upcoming election.

“I think a lot of LGBTQ people are really aware of what’s at stake and want to make sure any barriers that get set up in front of them, that we are able to go around or under or over to be able to make to sure our votes are heard.”

Murray emphasized that it is crucial not only to vote, but also to motivate our friends and family to do so.

“We’re not just voting for ourselves. We’re voting for the collective us,” he said. “Even with six days left, there is still an ability to motivate someone who thinks their vote doesn’t count by telling them, it’s important to me, and I need to make sure I’m protected, and I need you to make sure you stand up for me, and this is how.”