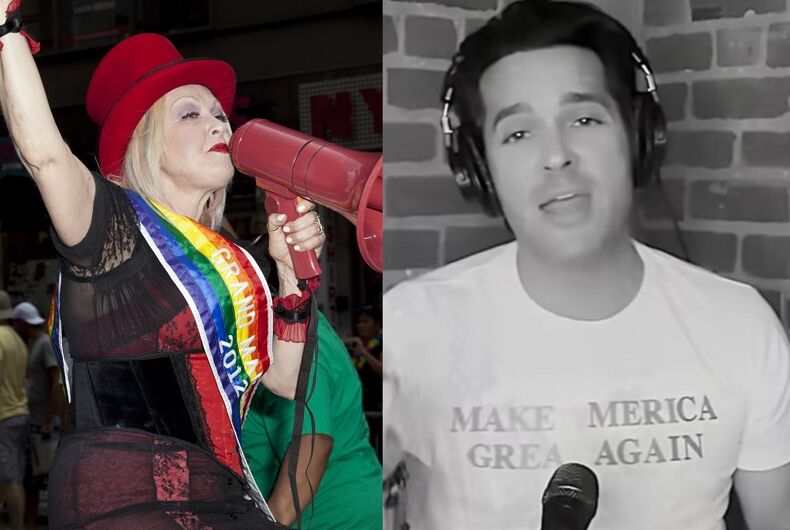 Pop icon Cyndi Lauper is ticked off that a gay Republican sang one of her biggest hits – “True Colors” – and made it about supporting Donald Trump, and she isn’t holding back.

“We have free speech in this country, which I would never change,” she told the New York Daily News. “But we also have the freedom to not listen to things that are coming from a place of hate and divisiveness and we have the right to not want our beautiful music co-opted for the wrong reasons.”

Related: Cyndi Lauper is going to win an U.N. award for her LGBTQ advocacy

The video shows images of businesses that were allegedly damaged during protests against police brutality and institutionalized racism earlier this year… and then some pictures of people in MAGA hats.

“This video is dedicated from me to the ceaselessly maligned Patriots in the MAGA movement,” he wrote in the video description. “To our law enforcement under attack. To those destroyed by the politicization of a virus. To every black/brown/LGBT person who’s been ostracized for thinking for themselves.”

He then asks people to send him money via PayPal, Venmo, and Patreon.

Straka said that he has felt “more love, support, and respect from Republicans, Donald Trump supporters, and the president himself than I ever could have previously thought possible.”

He said that he chose to sing “True Colors” because it shows “the unfortunate inability to live and express ourselves freely transcends the boundaries of what is traditionally thought of as just pertaining to minority classes of people in America.”

“I have not heard this version and won’t be listening to it,” Lauper snapped back. The long-time LGBTQ ally said that the song was meant “to be a healing song and it’s not appropriate for anything MAGA related.”

Lauper isn’t all talk when it comes to what that song means to her. In 2008, she started the True Colors United organization to help LGBTQ homeless youth through education and advocacy. She also opened the True Colors Residence in Manhattan, “the first permanent, affordable housing residence with on-site support services specifically for LGBTQ young adults with a history of homelessness.”

Meanwhile, Straka sued NYC’s LGBT Community Center last year when they wouldn’t let him use their building to host a rightwing panel discussion.

Straka’s version of the song is below [Update: The video appears to have been blocked in some countries for copyright reasons], followed by Lauper’s version as a palate cleanser.

Historical photos of men in love: Meeting in the middle