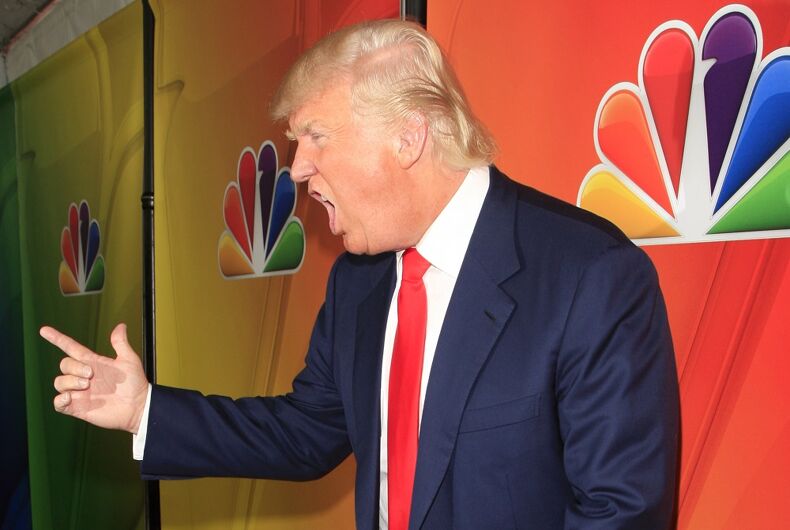 Donald Trump allegedly refused to let The Apprentice contestant Kwame Jackson win the reality show because he’s Black and gay, according to revelations in a new book from Trump’s former “fixer.”

“There was no way I was going to let this black fag win,” Trump allegedly said.

Former Trump lawyer Michael Cohen’s book Disloyal: A Memoir was released earlier this week, and Cohen wrote that Trump is more racist off-camera than he is in public.

“As a rule, Trump expressed low opinions of all Black folks,” Cohen said. “What he said in private was far worse than what he uttered in public.”

Trump refused to “hire” Jackson, the runner-up of the first season of Trump’s reality TV competition The Apprentice in 2004, because of his race and sexuality, calling Jackson an anti-gay slur.

Jackson, who has an MBA from Harvard Business School, is “a nice guy” and “brilliant,” according to Cohen.

Jackson said in a 2016 interview that Trump has a “huge racial blind spot.”

“He doesn’t have a lot of folks around him of color in executive management roles on his campaign, and I don’t think he has the perspective of a lot of minority concerns,” Jackson said about Trump at the time.

Cohen said on MSNBC earlier this week that Trump’s hatred of former President Barack Obama – who Trump accused for years of being born outside the U.S. even after Obama made his Hawaii birth certificate public – is rooted in racism.

“His hatred for Barack Obama is plain and simple: he’s Black, he went to Harvard Law, he graduated at the top of his class, he’s incredibly articulate, he’s all the things that Donald Trump wants to be,” Cohen told Rachel Maddow. “And he just can’t handle it. So what do you do if you’re Donald Trump and you can’t handle it? You attack it.”