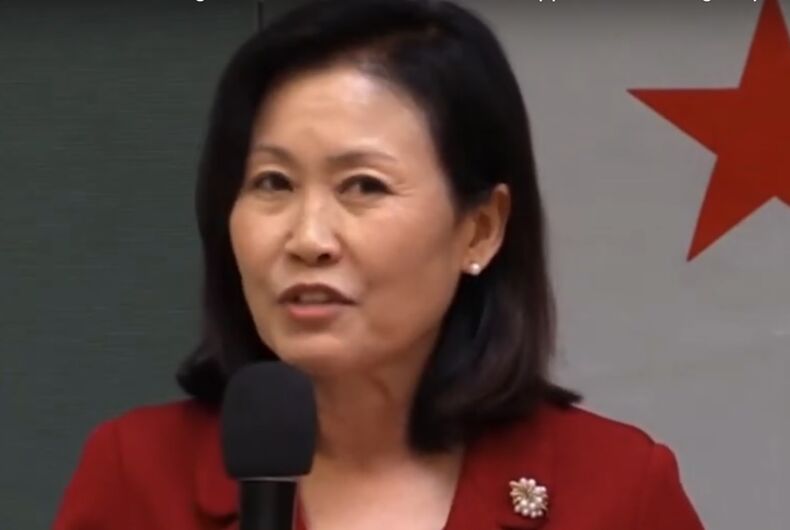 A Republican candidate for U.S. Congress was caught saying that she pulled her daughter out of college for “a year of brainwash” because the daughter supported LGBTQ equality, drawing laughs from the Tea Party crowd.

Michelle Steel is currently on the Orange County Board of Supervisors and she is running for California’s 48th Congressional District. Video of her speaking at a Newport Mesa Tea Party meeting in 2014 was released online this week.

Related: Pulse survivors held an ex-gay rally near the site of the shooting

In the video, Steel told the Tea Partiers about her two daughters. The first, she said, is “perfect.”

But this is how she described her second daughter: “God’s always fair, so they give you a little different kid for the second one.”

That daughter went to the University of California, Santa Cruz for a year after high school, Steel said. The daughter started to get more liberal at college.

“Then she started talking about that, you know, ‘I’m going to vote for Obama.’ There’s a change,” Steel said.

“And then she said, ‘God gave us two men — what’s wrong with gay marriage?’”

That was apparently a bridge too far for Steel: “We brought her back and we sent her to Marymount,” referring to the Jesuit Loyola Marymount University in Los Angeles.

Steel explained that the second daughter went to Marymount for “one year of brainwash” before transferring again to Vanderbilt University.

“Michelle Steel’s tired brand of homophobia has no place in Orange County and no place in the halls of Congress,” said Equality California Managing Director Tony Hoang. “Orange County families want and deserve a representative like Harley Rouda, who will fight to protect our civil rights — not someone who thinks LGBTQ+ people are second-class citizens.”

According to Metro Weekly, Steel has a history of voting against LGBTQ rights.

In 2017, she voted against funding for the Orange County Human Relations Commission in 2017. She also voted to block a report about hate crimes against LGBTQ people, immigrants, and minorities in the county.

Steel is running against Rep. Harley Rouda (D-CA), who co-sponsored the Equality Act in 2019, a bill that would add sexual orientation and gender identity to federal civil rights legislation, banning discrimination against LGBTQ people in public accommodations, housing, credit, and other areas.

The Dutch are writing LGBTQ rights into their constitution