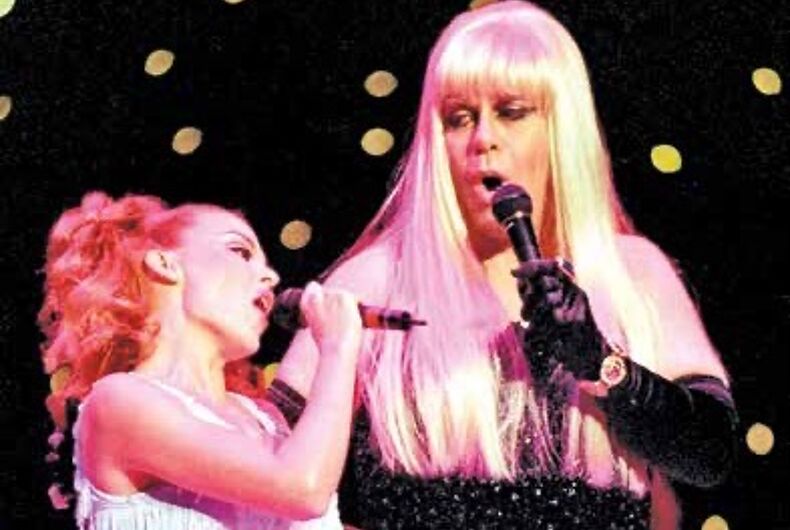 History is written by the winners, they say. Although we have won many battles (with countless still to fight) our history is not well known. How could it be? It’s still controversial to some that we exist let alone teach that there is a very rich history of heroic people who have fought for the lives and rights we are still winning. Not knowing has a real impact.

In my first book, Straight Jacket, I wrote about how homophobia had impacted my self-esteem and that of countless friends. Having no sense of our epic and inspiring history doubtless contributes. So, I jumped at the chance to create a book about some of the most impactful and important people and events from the fight for our rights. Though we can’t celebrate the Stonewall uprising together on the streets this year, now more than ever, we need to know who has fought to get us where we are today.

Related: Hundreds of rainbow flags are flying in a small town thanks to a 13-year-old

For this piece I was asked to pick three images from my new book Pride: The Story of the LGBTQ Equality Movement, out this week, that means something to me. One is of a lesbian Stonewall veteran whose name we should all know; another was chosen because I was there. The third is of a mother and son who prove that no matter how small we may think a gesture may be, we can all change the world.

This picture from 1972 resonates with me hugely. It shows Morty Manford, a Colombia University Student and his mother, Jeanne, at the Christopher Street Liberation Day Parade in New York (one of the first Pride’s) in 1972.

Morty had been at the Stonewall Inn on the night it was raided. Several years later he was attacked as he gave out leaflets and his outraged mother attended Pride with him holding a sign that read “Parents of gays unite in support of our children.”

She said later, “Young people were hugging me, kissing me, screaming, asking if I would talk to their parents.”

She and her husband Jules decided to start a support group for parents at their home in Queens, New York. 20 people attended the first meeting on March 11, 1973, but the group grew and grew. Eventually named Parents, Families and Friends of Lesbians and Gays (PFFLAG) their organization went on to have more than 400 chapters across the USA and have groups in over 15 countries around the world.

Morty sadly died of AIDS-related illnesses in 1992, aged 41. Jeanne lived till the age of 92, dying in 2013. Their contribution helps people to this day. It’s incredible that something they started so long ago in New York touched me as I was coming out in 1990 thousands of miles away in the UK. Knowing there was a group of parents trying to help other parents love their queer kids was a huge comfort.

It’s still a sad truth that a disproportionately high number of homeless kids are LGBTQ. I find it overwhelmingly moving that nearly 50 years ago a mother stood so publicly by her child and inspired hundreds of thousands of other parents to do the same.

In recent years, heroes of the early movement Marsha P Johnson and Sylvia Rivera have raised important awareness of the erasure of people of color and trans and gender non confirming people from the history of Stonewall and the fight for LGBTQ rights.

A lesbian woman of color and much-loved member of the New York queer community, believed to have played a key role at Stonewall, is still to receive the recognition she deserves though.

Born in New Orleans on Christmas Eve, 1920, the daughter of a white father and black mother, Stormé Delaverie performed as the drag King MC of the Jewel Box Revue, a drag show that toured America between 1955 and 1969 including performances at the legendary Apollo Theater in Harlem. She was at the Stonewall Inn at the night of the riots and many believe she was the “butch lesbian” who threw the first punch and shouted to the crowds, “Why don’t you guys do something?”, igniting the riots.

For years, Stormé worked as a bouncer and was a regular in New York’s lesbian and gay bar scene, often patrolling it, checking on the security of her “baby girls.” Her partner of 25 years, Diana, died in the 1970s and Stormé passed away in Brooklyn, New York in 2014.

She’s pictured here outside the famous New York lesbian bar The Cubby Hole in 1986. She remains an iconic figure and symbol of the diversity, power, and resilience of the LGBTQ community, as a performer, Stonewall veteran, and protector.

She said in 2001, ‘I’m a human being that survived. I helped other people survive’.

Believe it or not but the blond bombshell performing here with Australian pop star Kylie Minogue at the Equality Show 1995, is Sir Elton John.

The two duetted on “Sisters” (“there were never such devoted sisters”) at the annual fundraiser for the UK gay rights charity Stonewall at London’s Royal Albert Hall. Over the years stars such as Pet Shop Boys, Antonio Banderas, Jennifer Saunders Joanna Lumley, and Antonio Banderas made appearances, but it was Elton as his alter ego “Sharon” in Versace drag and Kylie who stole the show.

This photograph is a personal favorite of mine because I worked on that show and met Kylie which was a thrill – their performance was one of the most showstopping, fabulous things I’ve ever seen – but also because those shows felt like a fightback against the extreme media homophobia of the time.

Celebrities coming out and straight allies standing up for us were hugely important. Boy George, K D Lang, Elton John, Bronski Beat, Melissa Etheridge, Ellen DeGeneres and others coming out in the 70s, 80s, and 90s changed public perceptions.

Today LGBT people are an important marketing demographic for many popstars but in earlier years straight support was more impressive. There’s a special connection between gay audiences and famous women who supported us – especially in the early years.

Stars such as Elizabeth Taylor who committed her life to HIV and AIDS research and relief, Bette Midler who began singing in gay bathhouses, Cyndi Lauper who has a charity that supports LGBT homeless youth, and Madonna, who spoke up for gay people in a way mainstream American TV audiences had not heard before, made a massive difference when we were under attack not just from a virus but the hatred that came with it.

Matthew Todd was editor of Attitude magazine from 2008 to 2016. His first book, “Straight Jacket,” was shortlisted for the Polari Prize 2017 and was voted winner of the Boyz LGBT Book of the Year Award. His new book, “Pride: The Story of the LGBTQ Equality Movement,” is available on Amazon.