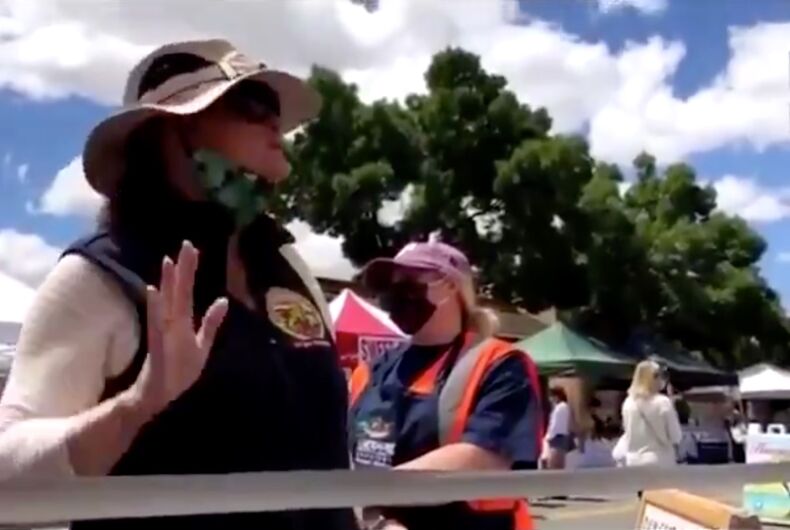 In a viral video, Gail Hayden, head of the California Farmer’s Market Association (CFMA), can be heard berating a vendor for giving away rainbow flags. The upset administrator’s demeaning tone and head-scratching rant ended up causing the organization to resign as overseers of the Livermore market.

Dubbed “Farmers Market Karen” online, Hayden tells vendor Dan Floyd that he could not give away Pride flags to “satisfy his political agenda.”

“This person may have an issue about ‘xyz,'” she says at one point, waving vaguely in the direction of other vendors. “I’ve been in places for 40 years where they bring out fetuses and put them on ironing boards. My job is to run the market, not to satisfy your political point of view.”

Hayden told Floyd that there was a prohibition on handing out flags in the 30-page rulebook and calls it “disturbing” that he hadn’t memorized it. The local NBC station points out that it isn’t actually in the document.

Instead, it says that “petitions and flyer distributions are prohibited inside the market. Information dissemination must occur outside the market or in the ‘free speech zone.’”

Hayden’s daughter, CFMA’s Senior Market manager, told the station that children were using the flags as swords, prompting her mother to react. No one complained and the woman did not mention any alleged sword fights.

“We apologize that he feels singled out,” she said. “We don’t want to single anybody out.”

After the video went viral, CFMA resigned as the head of the market. Floyd says he won’t return to the market.

idk if any of you have seen this but this karen ass bitch went off on the owner of dan good cookies at the livermore farmers market for handing out gay pride flags at his stand and it REALLY pissed off my mom and i. he’s the sweetest guy and everyone should go support him rn🥺 pic.twitter.com/CMe1d15FUs