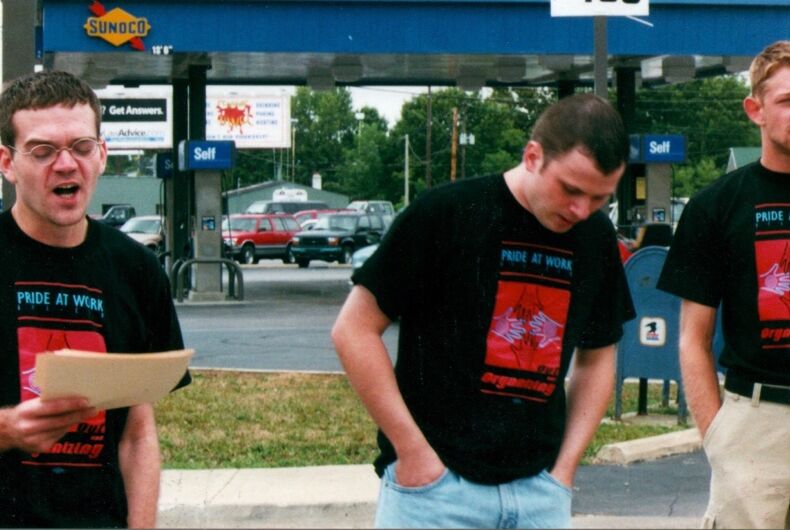 A day after the Supreme Court ruled in favor of employment nondiscrimination rights for LGBTQ people, it seems appropriate to tell the story of how my husband, Jerame Davis, our co-worker Matt Owen, and I found a way around the law in 1999 to get a measure of justice after we were all fired because we’re gay.

Along the way, we put out the internet’s first LGBTQ rights action alert, helped kickstart the fight for LGBTQ equality in Indiana by bringing folks together from all over the state, and pushed both Jerame and me into careers in the movement.

We protested outside the business repeatedly, we generated enough outrage online that their server shut down as thousands of angry emails from LGBTQ people around the nation poured into the home office, and we used the media to spread our message even further.

I’m not allowed to say the name of the business we’re standing in front of for this photo. We signed a settlement agreement with the company and agreed to stop protesting them and telling everyone how much they sucked. In exchange, the company agreed to our demands for justice.

From Top to Bottom

I’d worked my way up through a small convenience store chain from cashier to store manager. Jerame was the store’s assistant manager and Matt, the blonde, was one of a handful of clerks. As the head honcho, I had to go to a big meeting in Indianapolis for corporate bigwigs and store managers one day for a yearly see-we-really-care-about-you session.

During the meeting, the head of the company asked if we had any ideas for ways to improve the company. I raised my hand and suggested that the company expand its nondiscrimination policy to include gays and lesbians. I was politely thanked for my suggestion and the meeting moved on.

I’d recently won an award from the company and my career was rising quickly. A few days later, I was surprised to see three high-level executives waiting for me in the parking lot, but I naively assumed I was being promoted. I wasn’t. I’d never realized the company was owned by members of the religious right.

I was terminated because I brought up the non-discrimination protections. Jerame threatened to quit in protest immediately afterward, but they fired him when he did. Matt lasted a few more days before the new management’s anti-gay taunts and jeers made him quit.

Back then, it was still perfectly legal to fire someone in Indiana because of their actual or perceived sexual orientation or gender identity. Bloomington was one of the first Indiana cities to pass a nondiscrimination ordinance that protected gays and lesbians, but the problem was that it wasn’t enforceable since state law said it was okay.

We filed suit with the local Human Rights Commission, but the only thing they could do was send a notice to the company if they found our case valid. They did and the letter was sent. They couldn’t compel the corporation to cooperate with the Commission as they could in a racial or religious discrimination case; the company had to be willing to come to the table on their own.

Since the ordinance was untested and the city didn’t want to jeopardize it by starting with a severely anti-gay company almost guaranteed to cause waves, the head of the office didn’t want to push the case. While we wanted them to pressure the company into negotiating, they wanted a company that would seemingly waltz in, agree they’d screwed up, and start offering a settlement. We decided to give the Commission what they needed and force their hand.

Bilerico.com was already getting some traffic as my personal webpage. We took the personal site down and put up our version of events in a letter to the general public. We called for a boycott of the company and started getting the information out to every gay bulletin board, mailing list, newspaper, or AOL chat room we could find. Quickly, the news started to spread and a nationwide boycott of Sunoco and the convenience store chain was called.

Soon, the head of the local Pride At Work chapter came calling. We told them our story and showed them our proof and they started championing our cause. When we held our first protest outside of the store, we only expected a handful of folks to show up. Instead, we had several local folks, gay people from around the state, and union members.

The police had parked two cars on the parking lot to keep an eye on the situation, but that wasn’t the kind of attention we were seeking. Soon, television crews and newspaper reporters started showing up, and then we knew we had our audience. We read our short prepared speeches and answered questions about what had happened.

A week or so later, we were back to do it all over again.

This time, even more people and other groups joined the cause: The United Auto Workers, International Brotherhood of Electrical Workers, Jobs With Justice, Pride At Work, other AFL-CIO affiliated unions, other small gay groups, local churches, and many others started walking the picket line in this small Indiana town. And, of course, the media came along for the ride; it wasn’t often that the gays stood up for themselves in Indiana in 1999.

In Indiana, you can protest as long as you don’t block the sidewalk. We kept folks walking in a long line back and forth in front of the business — effectively keeping people walking continuously across where cars would normally drive in. Handmade signs blended with rainbow paraphernalia as more and more activists showed up.

Since it was a summer holiday, that weekend was normally one of the store’s more profitable, but the protest practically shut down the store for the entire time we were there. Instead of making handfuls of cash, cars were honking in solidarity and driving down the street. Bloomington is a blue-collar town and people don’t usually cross picket lines.

By this point, Sunoco was trying to distance itself from the controversy as fast as possible. They issued a statement condemning the anti-gay bigotry and announced they would be investigating the issue on their own end as the gasoline supplier.

Our case was starting to generate outrage and coverage nationally, and the website was getting tons of traffic as angry LGBT people came to the site to learn more and then sent e-mails to the company headquarters demanding justice for the three of us.

The corporation had recently acquired e-mail capabilities and we used it to our advantage. Thousands of e-mails poured into their headquarters and shut down their servers for days. They were inundated with angry phone calls when e-mails started bouncing.

The multi-pronged action eventually forced the company to capitulate; they just wanted the bad publicity to end. We were killing their business — even in conservative Indiana. While there may not be a state law protecting LGBT people, Hoosiers have a strong Libertarian streak no matter their party affiliations and a firm belief that everyone has the right to earn a living.

We never found out exactly why the Human Rights Commission Director was so unfriendly to our case. We assumed it was because we went against the grain and demanded more justice than they were willing to deliver. Once we started our publicity campaign, the director tried to talk us out of it several times.

As we went through the determination process, the company lodged all sorts of spurious reasons why they were justified in firing me and creating a hostile work environment for Jerame and Matt. We’d done our homework though and were able to counter all of their accusations.

They claimed I had a bad relationship with the vendors, but I had affidavits from all of them — from the milk delivery driver to the Marlboro representative. They claimed customers hated me, but I had affidavits from all the regular patrons. The tried to say I hadn’t changed the gas price one day, but the store’s electronic paperwork said otherwise. Oh, and then there was the award they’d given me at the managers’ meeting the day before they fired me.

My favorite was when the claim that we were disrespectful to one customer in particular. The corporate office employee who’d installed our store’s e-mail system and new cash registers said she’d heard all three of us refer to him as “Doctor Dick” and was offended; we’d created a sexually charged atmosphere because, you know, all gays think about is sex.

When we pulled out the affidavit from the customer it said I was the best manager he’d seen since the store was opened next to his medical practice. He was a chiropractor named Richard So-and-So. The kicker was that he signed it as “Doctor Dick;” it was his name, after all.

As soon as the company’s lawyers saw the affidavit from Doctor Dick, they acknowledged their defeat. They called the owner from a cubicle near where we were negotiating. Even inside the glass-walled meeting room, we could hear him yelling and cursing the lawyers about being bested by “a bunch of queers.”

Throughout the entire process, it was organized labor that stood shoulder-to-shoulder with us. They organized protests, helped spread the word, and when we were negotiating the settlement, we were represented by a labor professor from Indiana University instead of a lawyer. They rode in like the cavalry and gave us the support we couldn’t get from the government official supposed to protect our civil rights.

The web’s first online action for gay rights started a revolution in how our community uses the internet and how we demand our rights.

None of it would have happened without the support of Pride At Work and organized labor. Jerame is now the Executive Director of the organization where he continues to support LGBTQ workers’ fight for equality.

I have continued using the internet to tell queer stories of outrage and achievement, first after Jerame and I morphed that original homepage into the award-winning queer media outlet The Bilerico Project and later as a freelance journalist and Editor-In-Chief of LGBTQ Nation.

The company still screwed us over in the end — as corporations often do. While they agreed to our demands of a non-discrimination policy, diversity training for all employees, and to pay us back wages from the day we left their employ, they dragged their feet on actually paying us the settlement.

Months later they finally paid the bill. Instead of giving us the measly pittance we were owed though, they took out the highest amount of taxes they possibly could. “Since you’re not employed here anymore, we didn’t have proper tax information for you,” was their excuse. We ended up with less than half of the amount we’d settled for by the time their accountants had exploited every loophole in Indiana tax law.

We were upset, of course, but we got our satisfaction soon after. The company declared bankruptcy and was forced to sell off the majority of its stores months later. Between the bad management decisions chain-wide and the sustained negative publicity, the company couldn’t recover. Bigotry never pays.

Staff at J.K. Rowling’s publisher won’t work on her new book after her anti-trans rants