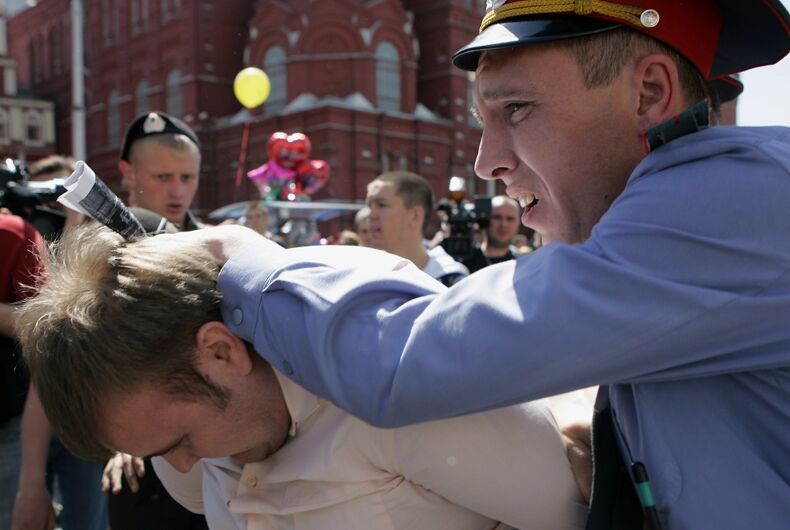 Police detain a gay rights activist during an attempt to hold the unauthorized gay pride parade on May 28, 2011 in Moscow.Photo: Shutterstock

Half of Russia wants to either eliminate or isolate gay and lesbian people, according to a new study.

The organization Levada Center interviewed a representative sample of 1614 adults in Russia this past February, asking them about what the country should do about various groups of people. The choices were to eliminate, isolate, assist, leave alone, or “don’t know.”

The only people Russians wanted to eliminate more were violent offenders and people with extreme ideologies: terrorists, child molesters, murderers, “radicals,” and members of cults.

According to the Levada Center, 35% of people said that gays and lesbians should be eliminated in 1989. That number dropped to 15% by 1999 and has stayed around 20% ever since.

The percent of Russians wanting to eliminate people living with HIV has also dropped considerably in the same time period, from 14% in 1989 to 2% in 2020.

“In general, the attitude towards almost all categories of citizens (from the ones proposed for choice), whose behavior can be perceived as ‘deviant’ or ‘undesirable’ has improved since the last survey in 2015, with the exception of ‘members of cults,’ about whom attitudes, on the contrary, have worsened,” the Levada Center said.

While homosexuality is technically legal in Russia, expressions of LGBTQ identity can be punished with up to three years in prison under the country’s ban on “propaganda” that supports “non-traditional sexual relationships.”