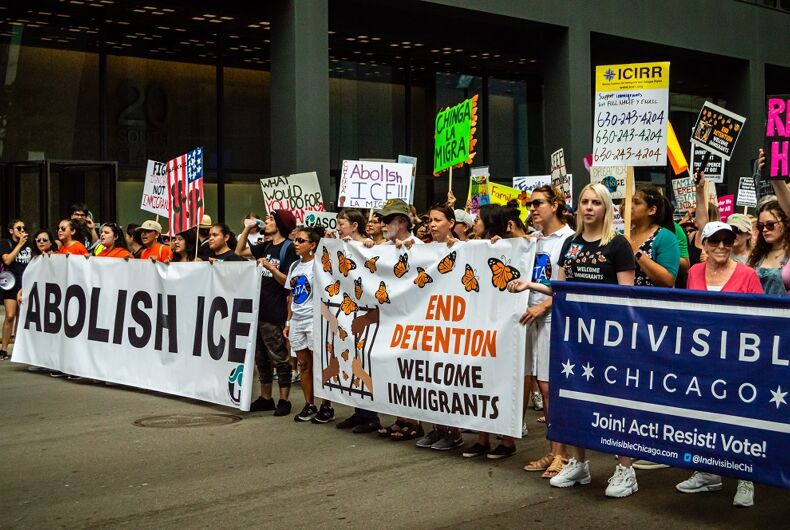 Several organizations have filed a class-action lawsuit to demand the release of all transgender detainees currently being held by U.S. Immigration and Customs Enforcement (ICE), citing ICE’s handling of the coronavirus pandemic as a source of violations of the immigrants’ rights.

“Facilities that were completely inadequate before the pandemic are now death traps for the innocent people locked inside,” said Gregory Copeland of the Rapid Defense Network, one of the organizations the filed the lawsuit.

The Rapid Defense Network is joined by the Transgender Law Center (TLC) and Ballard Spahr LLP in asking a federal court to order the release of all transgender ICE detainees into the community.

According to the TLC, at least 32 ICE detention centers have had COVID-19 outbreaks since March with 250 publicly reported cases of the disease among detainees and staff members.

The organizations say that ICE has not been providing appropriate medical care and has not been following social distancing guidelines from the Centers for Disease Control (CDC), setting up conditions where the virus can easily spread in cramped detention centers.

“A humane response to address COVID-19 is possible: release transgender people that are currently in ICE detention so that they can receive care and safety in the community,” said Lynly Egyes of the TLC. “ICE is responsible for the health and well-being of the people in its custody and to follow CDC guidelines while people are in detention. However, ICE is failing. This puts everyone, especially transgender people, at risk.”

“We have the resources to safely house people who are released,” Egyes added.

The lawsuit, which currently has 13 named plaintiffs from six different countries, argues that conditions are so dire that they violate transgender detainees’ Fifth Amendment due process rights and the Administrative Procedure Act.

The plaintiffs said they left their home countries out of fear of violence and are seeking asylum in the U.S. but are now being held in “dangerous conditions.”

“Living in detention is painful enough as it is. I can’t even imagine the additional fear of having COVID-19,” said Chin Tsui, a trans migrant. “I’ve witnessed too many transgender people pass away in my lifetime from this society’s neglect.”

This past Monday, U.S. District Judge James Boasberg ruled that ICE had to justify holding parents in custody for more than 20 days, expanding on a ruling that initially only applied to children. Boesberg cited the overcrowded conditions in the detention centers, as well as poor hygiene and lack of adherence to social distancing measures.

And earlier today, the ACLU filed a lawsuit against California Gov. Gavin Newsom (D) to get him to halt the transfer of prisoners from the state to ICE, calling ICE detention centers “virulent incubators of the virus.”

“ICE’s abject failure to protect the lives of people in its custody from the deadly COVID-19 is inviting a calamity — a public health crisis that will affect not just the detainees, but the surrounding communities and California as a whole,” the lawsuit says.

Jeff Goldblum suggested that Islam is homophobic & sexist. Is he right?