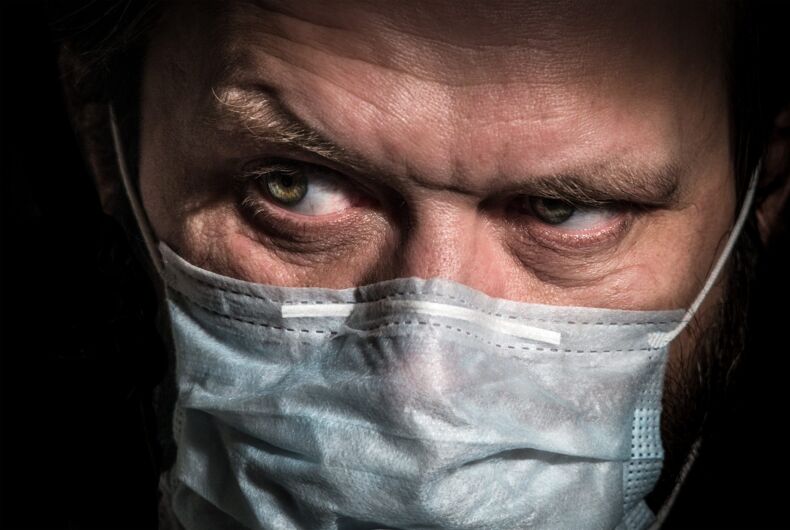 The coronavirus COVID-19 has brought out the worst in a lot of people, particularly in far-right circles. LGBTQ people were one of the first groups to be blamed for the pandemic, and the president blames China, Democrats, and the media for the crisis.

Now white supremacists are urging followers to use the opportunity to target Jews and police officers by spreading the disease “any place they may be congregated, to include markets, political offices, businesses, and places of worship.”

According to an FBI alert sent to police nationwide, “members of extremist groups are encouraging one another to spread the virus, if contracted, through bodily fluids and personal interactions.”

“From pushing the idea that Jews created the coronavirus virus to sell vaccines to encouraging infected followers to try to spread the illness to the Jewish community and law enforcement, as the coronavirus has spread, we have observed how white-supremacists, neo-Nazis and others have used this to drive their own conspiracy theories, spread disinformation and incite violence on their online platforms,” Michael Masters, the head of a group that coordinates security for Jewish organizations and synagogues around the country, told ABC News.

“While the world faces a deadly pandemic, it’s a stark reminder that certain groups – notably the Jewish community and law enforcement – must also continue the battle against those who wish to hurt or kill them,” he continued. “As the economic situation remains fragile and civil society disrupted, the potential for the followers of hate to act becomes more likely… and more deadly.”

Trump’s supporters have also added Italians to the list of people to blame for their own deaths.

While Trump has derisively refused to call the novel coronavirus by name and continuously calling it the “Chinese virus,” pundit Bill Mitchell took it in a different direction on Twitter. After being called out, Mitchell deleted the tweet, but made sure to tweet again declaring that it wasn’t racist because “italian isn’t a race.”

“NY is becoming the Italy of America,” Mitchell tweeted, referring to the dramatic rise in known virus infections in the state. “Has anyone looked into whether there is something in the genetics of Italians which makes this worse? Aren’t there a lot of Italians in NY?”

While Asians have taken the brunt of racist blame for the coronavirus pandemic, both Jews and Italians have historically faced discrimination in America. Italians were blamed for the polio epidemics of the early 1900s. Jews have been blamed for pandemics for hundreds of years.

While the American religious right now focuses on blaming LGBTQ people for diseases and natural disasters after recently embracing Zionism as a way to trigger the End Times, Christians have historically blamed Jewish people. During the Black Plague, thousands of Jews were accused of poisoning the wells of Christians and were systemically slaughtered.

Study: Over 99% of ITALY’s coronavirus fatalities were people who suffered from previous medical conditions & Average age-79.5
-17 people under 50 have died – all under 40 were males w/ serious existing medical condition
Similar to the standard annual fluhttps://t.co/9ffo8Jm8Dq