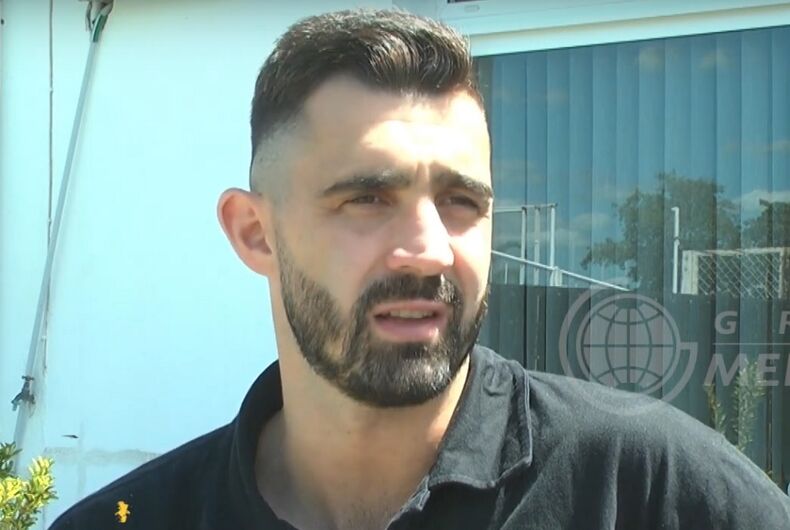 In his post, the 31-year-old basketballer who plays for the team Gimnasia de Comodoro recounted the years of shame he felt, the personal toll being closeted took on him, and the familial and team support he has experienced since coming out.

Related: An Indiana college refused to let Katie Sowers coach women’s basketball because she is gay

Vega wrote that after his first time sleeping with a man many years ago, he felt torn between his desire for men and his desire to be “normal.” He eventually met a woman who’d become his girlfriend for six years.

He wrote, “It was months of absolute personal confusion. I lied to myself, denied reality, I was frustrated, sad…. I wanted to fit in. I wanted to be like my colleagues and friends.”

Those years were like wearing “a very heavy backpack,” he wrote, and his desire to hide his true self outweighed his desire for her.

“Fear directly paralyzed me,” he wrote. “I was terrified that someone would suspect that I was gay. I became a closed person. I isolated myself so I wouldn’t have to explain myself and I even stopped doing things I liked so I wouldn’t expose myself to anything. I cried and cursed myself for a long time.”

During this time, he considered retiring from basketball, “what I love most in life,” in order to “have a quieter, more peaceful, far away from the exhibition.”

During his 2014 and 2015 basketball season, he began getting injured on a regular basis. “My body was obviously yelling at me that something was wrong, that I had to change,” he wrote.

He began seeing a therapist and decided to come out to his father. Although Vega feared his dad might disown or kick him out of the house, his father reacted lovingly and broke the news to his mother who gradually accepted him as well.

Gradually, Vega began coming out to his closest friends, his team captain, and his other teammates. He initially feared that his life would dramatically change or that he’d be pressured to leave the team, but their support gave him confidence that “I no longer had to live in the shadows anymore.”

Vega said he wanted to come out to close out the past stage of his life and to help encourage others who might be in a similar situation. Vega also said he wished to continue playing basketball as an out gay man with a renewed passion he hasn’t felt since he first debuted in the professional league.

In an interview with Reuters, Vega said that he had heard his teammates using homophobic slurs on and off the court before he came out. After coming out, several apologized and even became closer to him.

Although Argentina was the first Latin American country to legalize same-sex marriage, Vega says he had no LGBTQ role models growing up. He also said that being gay in sports is still a taboo topic because people equate homosexuality with a lack of masculinity.

“If I had [come out] five or six years ago, I don’t know if society would’ve been ready,” Vega said. “People are becoming more aware.”