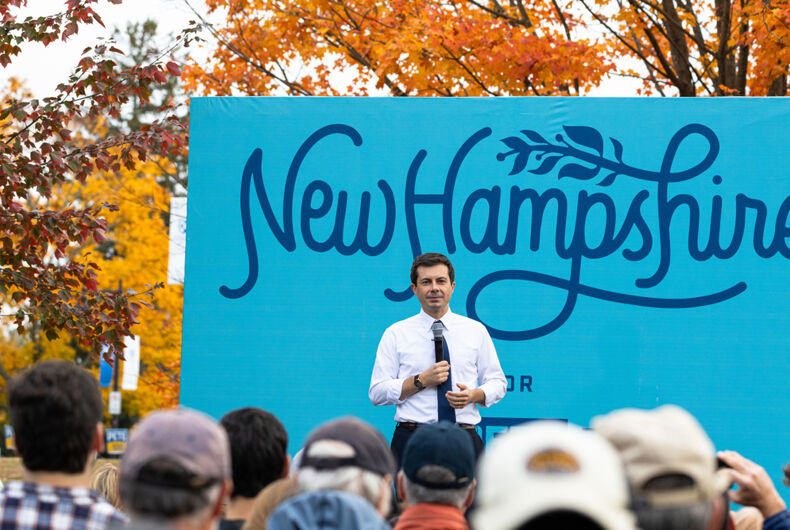 Out presidential candidate Pete Buttigieg has a slight lead in New Hampshire according to the latest polling. The numbers show former Vice President Joe Biden and Sen. Bernie Sanders (I-VT) running neck and neck with the former mayor of South Bend, Indiana.

On the flip side, when the list of potential candidates was narrowed to only the top four – Buttigieg, Biden, Sanders, and Warren – Mayor Pete did not come out on top.

The race continued to be tight, however, with Biden at 24 percent, Buttigieg with 23 percent, Sanders at 21 percent and Warren with 18 percent.

California senator Kamala Harris and former Housing and Urban Development Secretary Julián Castro both dropped out of the race recently. Former New York City mayor Michael Bloomberg was not included in the poll since he failed to register for the New Hampshire primary.

“The race remains fairly wide-open,” Monmouth University Polling Institute director Patrick Murray said in a statement. “To the extent that New Hampshire voters could take some cues from Iowa, it’s also worth keeping an eye on lower-polling candidates like [Minnesota Senator Amy] Klobuchar if any of the leading contenders stumble in the earlier Iowa contest.”

In the last presidential primary, former Secretary of State Hillary Clinton edged out Sanders by one percent in the state.

20 years ago, this legal case set the stage for the Supreme Court’s upcoming ruling on trans rights