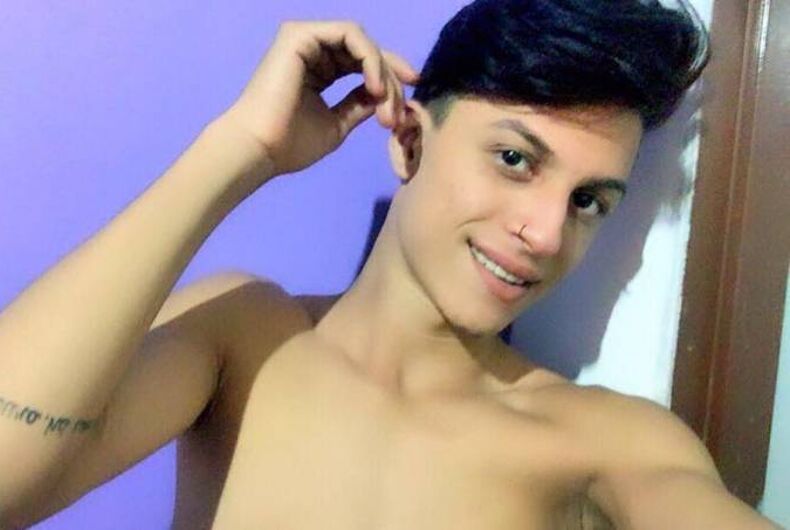 A mother who was convicted of killing her son because he’s gay has been sentenced to 25 years in prison.

The December 2016 death of 17-year-old Itaberli Lozano at the hands of his mother shocked the world. Investigators accused the mother, Tatiana Lozano Pereira, 35, of stabbing her son, burning his body, and burying him in a cane field near Sao Paolo, Brazil.

Related: A man shot & killed his 14-year-old son because he was gay

This past Wednesday, a jury sentenced Lozano Pereira to 25 years and eight months in prison after finding her guilty of homicide and corpse concealment.

Two accomplices, Victor Roberto da Silva and Miller da Silva Barissa, who were both teenagers at the time, have been sentenced to 21 years and eight months in prison for homicide, Veja reports.

Before his death, Itaberli was living with his grandmother, according to investigators. His mother was abusive and she did not accept his sexuality.

Prosecutors said that Lozano Pereira got Itaberli to come visit her, promising that she wanted to make up with him. Instead, he was attacked by da Silva and da Silva Barissa, who she had paid to beat him. The two later told police that she tried to hire them to kill her son, but they refused and only agreed to beat him up.

Once beaten, the mother stabbed Itaberli to death. Her husband – Itaberli’s stepfather Alex Pereira – helped her wrap the body in a duvet and drive it out to a cane field, where they set it on fire and buried it.

Eight days after she killed him, his grandmother reported him missing and Lozano Pereira told investigators that he was dead. His body was burned so badly that investigators could only confirm his identity by using a bracelet he had on that he wore in several pictures he posted to Facebook.

The mother told the court that she stabbed her son in self-defense. She said that he was on drugs and that he would bring strange men home, and that on the night of his death he tried to kill her.

Relatives, though, disagreed with the portrait she painted of an out of control teen. His uncle, Dario Rosa, said that the boy had a job and was polite.

“He only had problems with his mother, who did not accept that he was a homosexual,” the uncle said.

The stepfather, Alex Pereira, was being tried for corpse concealment along with Lozano Pereira, but he turned against her. Their lawyer later told journalists that his testimony was “instrumental” in convicting Lozano Pereira and her two teenage accomplices.

The lawyer argued in court that Periera’s testimony was a conflict of interest. The court decided that Periera would be tried at a later date.