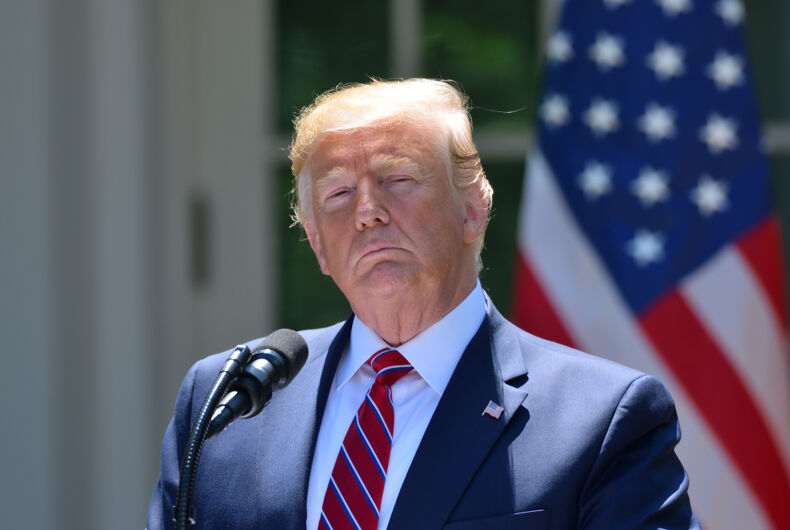 President Donald Trump’s trade war with China is hitting Americans’ pocketbooks, but his base felt the bite even harder for Halloween. Evangelical Christians, notorious for handing out religious tracts or gross candy wrapped in a Bible verse, had to pay more for the Halloween “treats” that kids hate.

Trump’s trade war has also dramatically increased the cost of the paper used to make Bibles, putting a pinch on already struggling Christian bookstores. China is the world’s largest manufacturer of Bibles.

Related: What do Trump’s attacks on the European Union & US allies mean for LGBTQ rights?

Eighty-one percent of evangelical Christian voted for Trump in 2016, and now he poses the single greatest threat to their central religious text – especially when you add in the increased costs of making awful “treats” meant to warn six-year-olds of the dangers of hell.

“In 1991, while listening to ‘Focus on the Family’ on the radio doing a program on the occult and Halloween, GOD gave me the inspiration about turning a pagan holiday into something to glorify GOD. Since we give out candy as ‘treats’ during the holiday, if we could wrap the ‘Word’ around the candy, every piece we gave out would have the possibility of planting a seed in a person’s life,” Brian E. Adkins, founder of Scripture Candy, told the Christian Post.

The company’s products are manufactured in China and Mexico. Trump’s tariffs include sugars, candies, and cane sugar as well as paper products and manufactured goods.

“Oh my heavens. We were hit. We were brutally hit. It’s been tough. We’re hoping that it will eventually go away,” co-founder Michael McCarron said.

“We try our best to get stuff here in the USA. We get stuff from Canada, we have a lot of U.S. based companies that have their factories in Mexico, because of the sugar tariff. That’s the only way that US companies compete by having a factory across the border and then we do bring in some stuff from China so it depends on the company,” McCarron added.

“The cool thing about the China stuff is that we’ve gone out there, met with the manufacturer, gone to church with them in China and so we have a strong Christian manufacturer there that… brings in workers and exposes them to what we’re doing too. So it’s kinda of guerrilla marketing to help witness in that country where sometimes it can be extremely dangerous,” he said.

But still, he isn’t giving up faith. In Trump.

“I will tell you I think it’s the right strategy for our country that’s being done. It’s just hard being on the receiving end, being the guy sucking it up making it happen. I understand the rationale and I agree with the rationale but it hurt us pretty hard so we’ve had to really get creative.”

Like finding a way to justify the destruction of your own business? Or supporting America’s most decidedly un-Christ-like President? Cheering on attacks on immigrants and the poor, sexually assaulting women, and mocking the disabled?