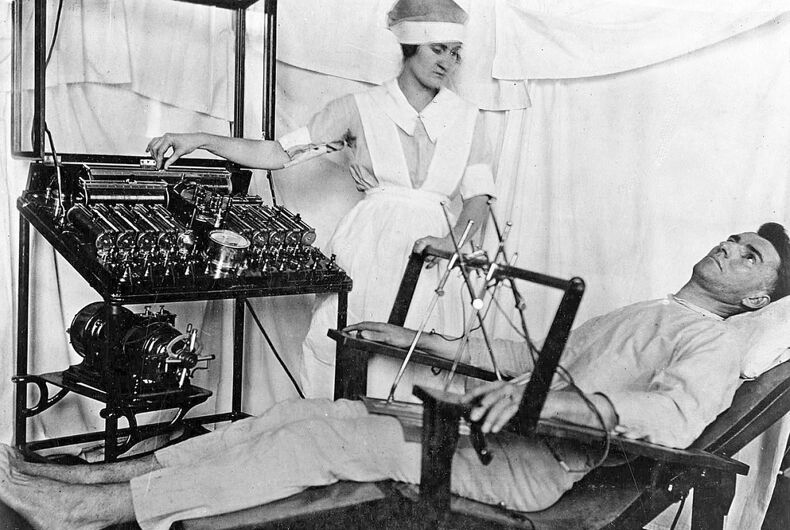 In the 1960s and 1970s, Queen’s University in Belfast, Northern Ireland, had a way of treating LGBTQ people: electroshock therapy.

In a revealing story from the Belfast Telegraph, a former patient given the pseudonym “John” shares his experience after he was referred to the Department of Mental Health at Queen’s University.

“I was shown a series of what, I suppose, one would regard these days as mildly pornographic images of naked young men,” said John. “I was given gutties [rubber-soled shoes] and these were connected up with electric wires to a voltage and I would receive the shock in my feet.”

When John felt aroused by any of the photos, he was to press a button to receive a shock. There was a catch, of course: if he didn’t press the button for too long a period of time, he would get shocked anyway.

“They would continue giving me a shock until I pressed the button again to say I was no longer experiencing any arousal,” said John.

“Yes, it was painful, it was pretty horrible,” he added. “You would then associate any gay, homosexual feelings with something unpleasant – a conditioned reflex really.”

Queen’s University ceased to use electroshock treatments many years ago and now disavows the practice, according to a spokesperson.

“While we cannot change practices of the past, Queen’s University is fully committed to creating and sustaining an environment that values diversity and strongly supports its LGBT+ community,” said the University’s spokesperson to the BBC.

The University now has LGBTQ groups for both students and staff, and regularly participates in Belfast Pride – a far cry from its past.

John, who had initially joined the program hoping to find a cure, quit the program after only a couple years. Needless to say, it did not change his orientation.

“I suppose it is barbaric, what can I say really; I would have done anything to become normal as I saw it,” said John.

“I don’t think I’ve been damaged by it; I haven’t suffered post-traumatic stress – I got over it,” he said.

“Luckily, fairly soon afterwards I did start to meet some gay people and my life changed completely then and since then things have been much better,” he added.