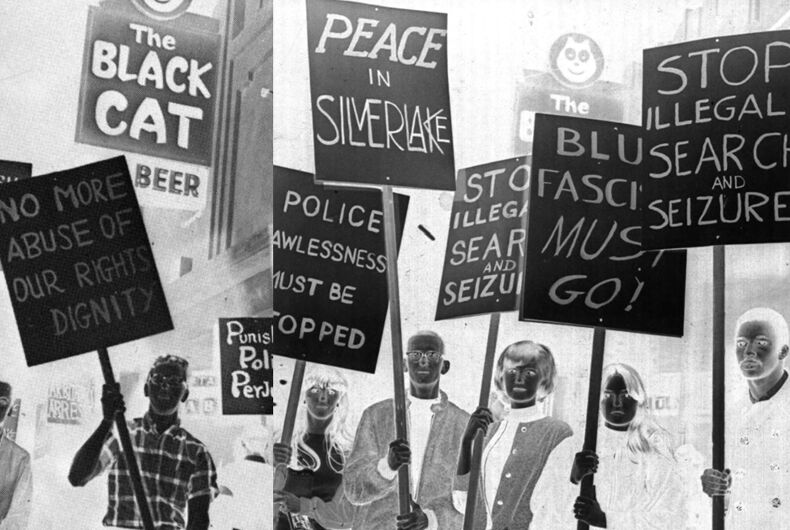 Photo: Courtesy of the ONE Archives at the USC Libraries

If one takes the time to look behind the curtain, they begin to wonder if it could have simply started as an autocorrect mistake – “Black Cat raid” to “Black Cat riot” – a mistake that became a meme and kept spreading like a bad cold.

One would think someone might have noticed the absence of anyone claiming to have thrown the first shot glass or brick or rock or shade heard ‘round the world. Even Sylvia Rivera didn’t claim to have been there.

But the belief that there was a “riot” (or “riots”) at the Black Cat Tavern in Los Angeles in 1967 – by all reasonable analysis a myth – has become a priori truth, Holy Writ, Gospel to many.

While accounts of some details vary, we do know that, during a time of virtual warfare by the LA police department against all minorities, against anyone who deviated from the status quo, there was a Trojan Horse-like raid on the Black Cat that New Year’s.

Plain clothes undercover cops had mixed in with the regular patrons, waiting eagerly for the first cue to start arresting people and summon waiting reinforcements. When they did,  it escalated almost immediately into unprovoked brutal physical assaults, which then spread to the bar next door.

“One of the officers started tearing down Christmas decorations in a frenzy, and another pulled out a gun.”

This wasn’t homophobia; it was homo-hatred. If anything, there was something of a police riot; a smaller version of the police riot in the Castro in 1979 after gays rioted at San Francisco’s City Hall in response to Dan White being found guilty of only manslaughter despite his transparent premeditated cold-blooded murders of Harvey Milk and Mayor George Moscone.

I’ve been unable to trace who first claimed the patrons rioted. The January 19, 1967, edition of County Courier: The Voice of Los Angeles reads like a self-serving press release written by the LA police department that, had it really happened, might’ve been called at least a mini-riot.

According to the area police commander, his thugs (oh, excuse me, “officers of the peace”) were attempting “to make routine arrests at a known ‘gay’ bar . . . when all hell broke loose. It ended with 17 arrests and three policemen badly injured.”

“Three policemen badly injured; one hospitalized for nine days”? If y’all believe all of that, I’ve got a bridge in San Francisco to sell you.

Oddly, on another page in the same issue, the Courier also printed the bar patrons’ accounts of police brutality as fact, but still said nothing about a “riot.”

While the February 1967 PRIDE newsletter (which would evolve into The Advocate) mentioned the police’s claims of injuries, the closest they came to suggesting anything remotely like a “riot” was the article’s title, “Cops Start Bar Brawl.” Clichés apparently being rationed that year, they also used the expression, “all hell broke loose.”

Nor was there any mention of a riot in the January 5, 1967 press release from the Tavern Guild of Southern California.

Alexei Romanoff, who was around at the time and often speaks about the event, says there was no riot.

Friends of the Black Cat member Wes Joe, one of those who convinced the city in 2008 to designate the Black Cat space as a historical-cultural monument, says there was no riot.

But the myth of the patrons rioting persists. Until recently corrected, that assertion appeared on the Wikipedia page for the Black Cat, identifying their source as the book Gay L.A. – except the book says no such thing.

Multiple LGBT newspapers have also regurgitated the myth including the Bay Area Reporter and the Los Angeles / Washington Blade.

Promotions for A Long Road to Freedom: The Advocate Celebrates 50 Years, read: “Starting with the Black Cat riots, this moving feature-length documentary…”

Institutional memory is often lost regardless of the industry, and their memory was nearly mortally wounded by AIDS. But it’s especially surprising that the magazine that was born out of what happened at the Black Cat wouldn’t also remain crystal clear about what didn’t happen.

How does one understand the repetition of the myth by pillars of supposed intellectual rigor? This year, even the prestigious Gay & Lesbian Review republished a 2012 article  – “The Black Cat Riot in L.A” – in their 25th anniversary “Best Essays” collection.

ONE Archives Foundation, Inc., in collaboration with UCLA History-Geography Project and the Los Angeles LGBT Center offers a module for school teachers to teach about the “riots” in their LGBTQ history lesson plans.

The “riot” is referenced in the critically important LGBTQ America: A Theme Study of Lesbian, Gay, Bisexual, Transgender, and Queer History, a publication of the National Park Foundation and the National Park Service.

It was also featured in the Queer California: Untold Stories exhibition at the Oakland Museum of California this June. A history exhibit in Pride Hall of the new spectacular $141 million Anita May Rosenstein Campus of the Los Angeles LGBT Center claims that the raid “sparked a riot.”

What did – and did not – happen

We do know for certain that there was an organized peaceful protest at the bar on Feb. 11, 1967, with a picket line and a rally with speeches. That didn’t become a riot either and it occurred only on that day; not on multiple days as the Los Angeles Times, et al., have asserted.

Romanoff said, “We were very orderly.” If a leaflet dropped to the ground, it was quickly picked up to avoid giving the police an excuse to start arresting protesters who, also, were careful to stay on the sidewalk. “It was an angry demonstration,” Romanoff added, “but orderly.”

Late legendary activist and historian Jim Kepner, the lead organizer of the event, said nothing about a riot, but recalled in 1970:

“The owners of [straight nightclub/coffeehouse] Pandora’s Box had started the general protest against police brutality and harassment in West Hollywood, mainly on the Sunset Strip. They called for other minorities [blacks, Latinos] to join [with simultaneous separate protests in other areas such as Watts] after Sheriff’s officers had given the hippies and flower children several bloody weekends.

We arranged our demonstration to coincide with the others, but the owner of Pandora’s Box made several attempts to have us call off our demonstration when he discovered that the word ‘homosexual’ was going to be mentioned.”

So, “under pressure,” there was no explicit references to gayness in the Black Cat group’s flyer, speeches or picket signs.

As noted above, in 2008 the City of Los Angeles Cultural Heritage Commission installed a plaque on the building designating it Historic Cultural Monument No. 939, and claiming that it is the “Site of the first documented LGBT civil rights demonstration in the nation.”

How that wording was written, let alone approved, is unfathomable, just as is professional media such as NPR and CBS Los Angeles blindly reciting it.

The first? By the time of the Black Cat protest there had been over 20 gay rights demonstrations across the country.

There had been four at the White House alone, four others in New York City, three in Philadelphia; plus protests in Chicago and San Francisco including the Compton’s Cafeteria riot…

There have also been repeated claims that the 1967 Black Cat protest “helped launch the gay civil rights movement,” “helped to ignite the modern LGBT movement,” etc. But what were those previous 20+ events then? Wet matches?

There is the claim that it was the first time any gays had declared they were entitled to equal protection under the law.

There are claims that it was “the first time that that many people stood together in public for gay rights.” But that’s not true either.

In recent years Romanoff has estimated that 300 to 600 people participated.

Main organizer Jim Kepner said three years after the event that there were about 200 in the crowd, “at least a quarter of whom were police, with groups of 30 or 40 more watching from across the street on each corner, and about 40 pickets walking up and down in front of the Black Cat.”

However, a Tangents article reported the year before the Black Cat demonstration that at the May 21, 1966, San Francisco protest of the military’s ban on gays, “an estimated 40 to 50 persons paraded with signs. A total crowd of close to 500 witnessed the demonstration and heard the speakers from the various groups.”

None of this is an attempt to take away what those in LA did accomplish that night in 1967; nor their courage to publicly protest in any circumstances, particularly when surrounded by police, some of whom might’ve taken part in the New Year’s Eve attack on the bar.

Nor is it meant to take away anything from those who had the courage to fight their arrests, some all the way to the Supreme Court.

Kepner believed the Feb. 11 action had a major positive effect on the local movement though he sometimes expressed disappointment in some people who he thought weren’t doing as much as they could.

While it may seem shocking to us 52 years later that he would let the straight organizer of the joint protests convince him not to say “homosexual” even at our community’s own event in front of the Black Cat — or even explicitly reference the raid on the picket signs — he made huge contributions to our progress and what he said at the rally I still find deeply moving. He shared it in a 1970 letter to Donn Teal for Teal’s magnum opus The Gay Militants:

There is a protest tonight in Watts, and no one has to be told who the victims are who are protesting.

Nobody can hide the names of the people who are protesting in Watts. We know who the victims are of police lawlessness in East L.A. [Chicanos]. Nobody needs to hide their name. We know who they are in Pacoima [blacks], and in Venice [blacks and hippies] and on the Sunset Strip [hippies]. Nobody needs to hide the name of those who are protesting on the Sunset Strip.

But some of those organizing the demonstration on the Sunset Strip, who fight to defend the victims of police brutality on the Strip, have ordered us to hide our name. They didn’t want the public, the press, or maybe the police, to think that they are associating with any of us…

Look at your neighbor here tonight, at the guy or gal standing next to you now. Do you know who he is? I mean what he or she is?… It’s unmentionable… And those who bear that name have, like Negroes, Mexicans, juveniles, alcoholics…  been the constant victims of police lawlessness, and brutality… recently here in this neighborhood.

The time has come when the love that dared not speak its name will never again be silenced.”

Can Mayor Pete’s cash pile make up for his lack of African-American support?

Election Day should replace Columbus Day as a federal holiday