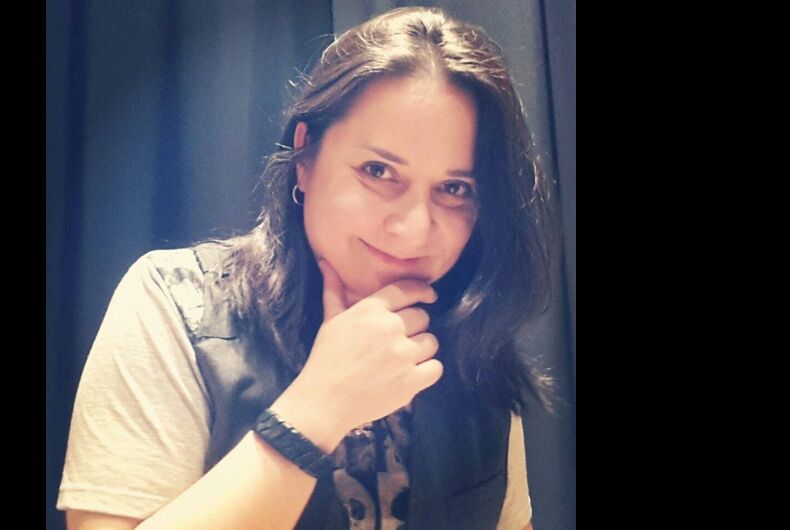 Sandra Valls has been making people laugh her whole life, but she’s been doing it as a professional since the early 2000s. However, she didn’t always see her future on the stage making jokes. In fact, she thought she would become a nun.

“I didn’t have the crushes that other girls had. I loved Farrah Fawcett. I loved Donna Summer. I was all  about Charlie’s Angels,” said Valls. “So, I just thought, here are your choices: grow up and get married, or grow up and be a nun. I’m going to have to be a freaking nun!”

Growing up in Laredo in the ’70s, with virtually no queer visibility in the media, nor in the culture at large, she saw few other alternatives in her future.

She endured bullying as a teenager for her perceived lesbianism, even though, as she puts it, she was very asexual.  However, she took the taunts in stride and refused to let her bullies deter or distract her. It would be an approach to challenges and rejections that she continues to employ today.

“Back then I thought ‘ What about the liar over there. Look at the cheater over there’,” she recalled. “Lesbian is not that bad. Why is that an insult?”

In high school, though, she and friends from other high schools formed a band. “Bad Habit” was the name, and they performed all over Laredo. It was her first foray into the world of entertainment and it set her on the career path that she has been on ever since.

Valls studied musical theater in college, pursued her studies, and remained essentially asexual and a late bloomer throughout. Save for one boyfriend in high school, which she says never really amounted to anything more than a platonic friend, she pretty much abstained from romance.

This would change when she moved to New York City in 1988.

It was as a student at the American Musical Dramatic Academy when Valls officially came out. She befriended a fellow student who one night asked her if she wanted to drink some beers on the rooftop of her Upper West Side apartment. Though she had received “warnings” from other classmates that the woman was a lesbian, Valls said she didn’t care. She wanted to make friends, and she wanted to meet people. “We were in New York City!” said Valls.

They got the cheapest beer they could find and went to her friend’s rooftop. There, with the vastness of New York City gleaming before them , they talked about their hopes and dreams of making it as big actors and entertainers. As they were carrying on, Valls said it was then she noticed that her friend began to inch closer to her. Her initial thought was that her friend was cold, which she thought was odd since it was definitely not cold out.  She inched closer and closer until finally asking Valls if she could kiss her.

“My entire life flashed before me and I thought ‘here’s my chance,’ but also ‘oh no, everyone will find out! But then I thought, ‘you know what, I’m in New York. I’m a woman of the world; I can do whatever I want.”

She agreed to be kissed and when it happened the first thought she had was “What have I been missing?!” At 24, after this kiss, she realized that she was a lesbian.

It would be several years later before she told her mother. Valls was living in Boston at the time. During her weekly phone calls with her mom, she was peppered with questions about her love life, whether she had a boyfriend. Eventually the questions about men stopped, and she was instead asked if she had anyone “special” in her life. When she confirmed that she did, her mother happily asked, “oh, so you have a boyfriend?”

After some initial concerns about not hugging her enough as a kid, Valls’ mom finally accepted the news. A few days later, they talked again. In typical Latina mom fashion, Valls’ mom told her she hadn’t been able to sleep, to go to work, or to leave her room after the news, but she wanted Valls to know one thing: “I love you. And I respect you so much more. As long as you’re happy, I’m behind you all the way. Just don’t tell your tías (aunties)!”

Valls says her comedy has changed in the last five to eight years, especially after the 2016 election. Where before her routine centered on dissecting the cultural eccentricities of her beloved Latinx community, much of her act now focuses on making sure her audience feels uplifted, empowered, and encouraged.

This was solidified when she was scheduled to perform the day after the election aboard an Olivia cruise, where she was one of the scheduled entertainers for the trip.  She initially thought it would be celebratory performance, but after the results came in, she knew had to change it up.

“Instead of telling jokes, I thought that I needed to remind ourselves that we have to stick together, that’s there’s power in numbers, that now is the time to really do the self work because I believe love wins. It may not look like it at first, but it does,” said Valls.

Now her act incorporates a lot more music, singing, and an encouraging message at the end. She credits her spirituality (Valls is a priestess of Ifa and draws strength from the goddess Yemaya) with helping her to drive home the message of sticking together, especially in this dark time for the Latinx community. She always strives to make her audience feel better when they leave than when they came.

And, this holiday season, Valls hopes to reach even more people with her message of positivity and encouragement through her upcoming off-Broadway play, “Latina Christmas Special,” which is scheduled to debut this December. (Tickets are available now) The labor of love has been five years in the making and will highlight much of her life and how she has weathered ups and downs through it all. And, of course, with a comedic twist.

“You can never go wrong choosing yourself first. You have to choose yourself. I believe that the world needs each of our magic. If you’re not doing your part, you’re letting us all down.”