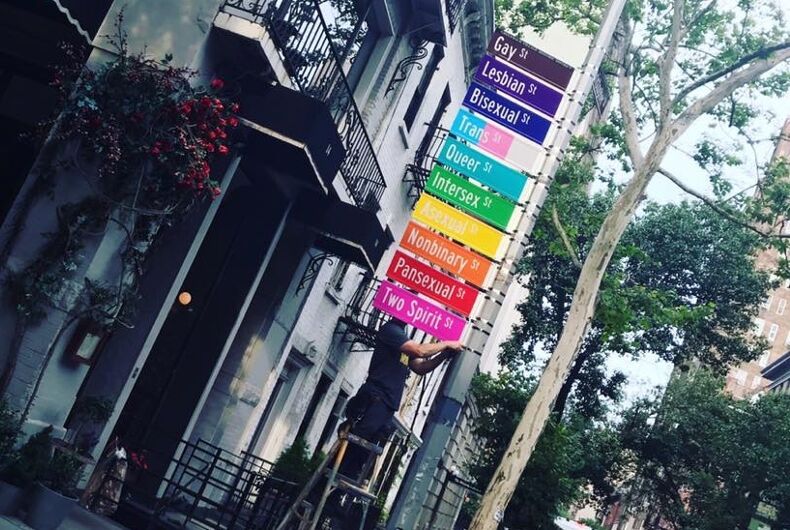 To honor World Pride, New York City is renaming the iconic Gay Street in Greenwich Village to be more inclusive. But if you think ever-expanding list of letters to describe the LGBTQ community is getting too long, wait until you see the street sign.

But was the street renamed “Gay” to honor the community or a long-dead resident? According to historians, the origins are shrouded in mystery, but it definitely wasn’t a nod to the queer community.

This street, originally a stable alley, was probably named for an early landowner, not for the sexuality of any denizens, who coincidentally reside in Greenwich Village, a predominantly homosexual community. Nor is it likely, as is sometimes claimed, that its namesake was Sidney Howard Gay, editor of the National Anti-Slavery Standard; he would have been 19 when the street was christened in 1833. The mistaken association with an abolitionist is probably because the street’s residents were mainly black, many of them servants of the wealthy white families on Washington Square. Later it became noted as an address for black musicians, giving the street a bohemian reputation.

Amazing. To be honest, from the time I moved here almost 30 years ago, I kinda wondered if Gay Street was named for the gays or if it was just coincidental that a street was named for someone with the last name Gay right in the middle of what became the Gayborhood. I considered myself decidedly educated that it was the former when I saw this video, but Melissa Sklarz in the comments below informed me that it is indeed the latter. Regardless who it’s named for, it’s queer now. Happy Pride! #Repost @cathyrenna with @get_repost・・・It’s not simply “gay st.” Anymore! #stonewall50 #worldpride2019 #lgbtq