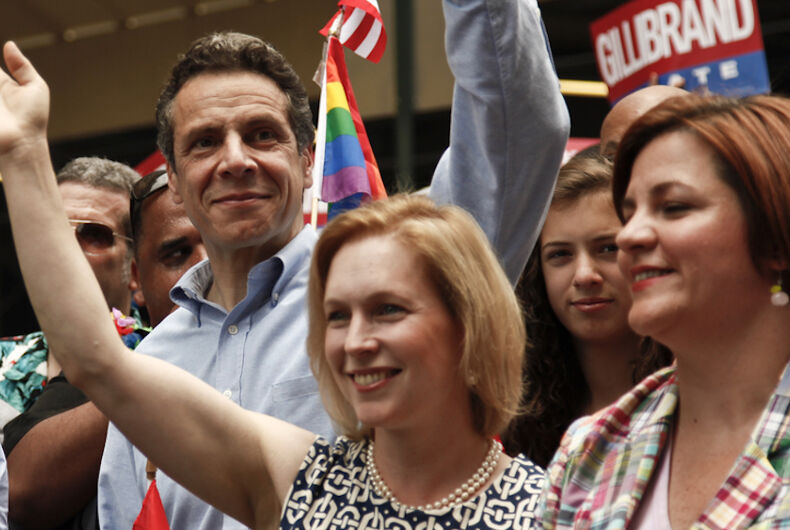 To commemorate Pride month, Democratic presidential candidate Kirsten Gillibrand released her LGBTQ rights agenda. It’s ambitious and there are some doubts it’d pass a Republican-led Senate, but here’s what’s in it and how she could still push some of it through as President.

In the release of her agenda, she wrote:

LGBTQ Americans deserve a president who will always stand with them and protect their civil rights — without hesitation. Unfortunately, what they have right now is a bigoted, cowardly bully who makes the LGBTQ community more vulnerable….

As president, I would undo Trump’s harmful policies and defend the civil rights of LGBTQ Americans. And I’ll push for proactive policies to ensure all Americans can live free from discrimination and bigotry based on their gender identity or sexual orientation.”

To every LGBTQ American celebrating how far we've come, and bravely fighting to keep marching forward: Happy Pride Month. Whoever you are and whoever you love, you are perfect. pic.twitter.com/x8oAGLyj9Q

We have reached out to Gillibrand to ask how she would further these policies considering that they will likely be stonewalled by a Republican-lead Senate, even if Democrats win the White House.

If elected, she could implement some of these policies by executive actions and memorandums which could then easily be undone by future administrations.

She could also encourage businesses and religious leaders to pressure Republican legislators into supporting some of these policies, but the very well-funded and vocal religious right will surely mount a counter-assault, painting her as an anti-Christian secularist despite her Catholic faith.