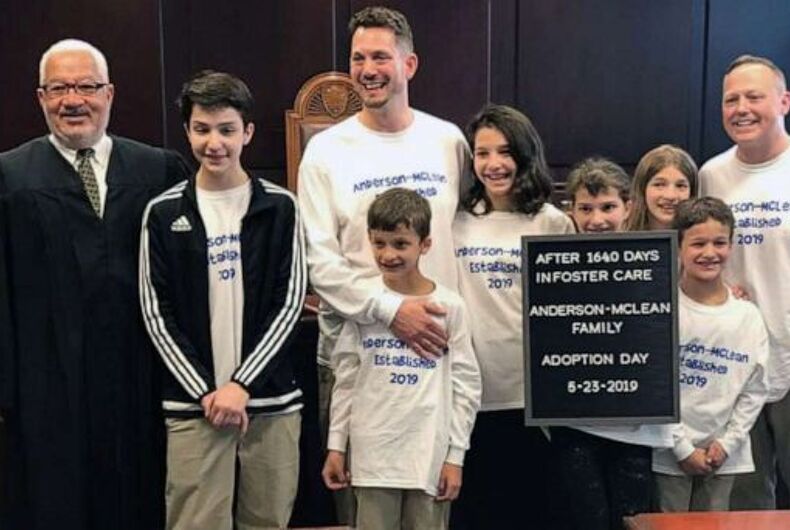 On May 23, 2019, Steve Anderson-McLean and Rob Anderson-McLean – a same-sex couple of 18 years living in Pittsburgh, Pennsylvania — adopted a group of six brothers and sisters who had spent 1,640 days in foster care just to keep them all together, according to Yahoo News.

The Anderson-McLeans legally married in Maryland in 2013 and had also had a commitment ceremony in 2006. They’d raised two sons together from a previous marriage, but they wanted to continue raising a family, so they considered adopting.

When researching their options, the men were inspired to adopt a group of siblings after watching a TV segment about another couple that did the same. Soon after, they found a group of six siblings featured on an Ohio state website.

Steve said, “It was a bad background, a sad story — there was neglect and abuse.” Although the childrens’ birth-parents lost their parental rights in fall 2017, Steve said that upon meeting the kids, “We instantly fell in love. They’re very easy to make smile.”

Upon completing the adoption in court, the judge told the fathers, “Do you understand at this point forward they are your children? They are just as much as your biological children.”

Steve said, “Obviously we knew that, but when I looked up and saw all those eyes, it was very emotional. We never imagined we’d be lucky enough or blessed enough to have six.”

Related: Adoption agency backs down from threat to close if they can’t discriminate against LGBTQ people

Right now there are an estimated 690,000 children in U.S. foster care awaiting adoption. So when social conservatives create laws allowing religious adoption agencies to discriminate against same-sex couples, they’re denying children a chance to be raised in a loving home.

Children who never get adopted out of state care end up experiencing higher rates of mental problems, unemployment and homelessness which get passed onto taxpayers in the form of social costs.

Back to the newly formed family, Rob Anderson-McLean said, “It feels as if our emotional bonds were years in the making. There are no rules as to what can constitute a family, and the love that we share.”