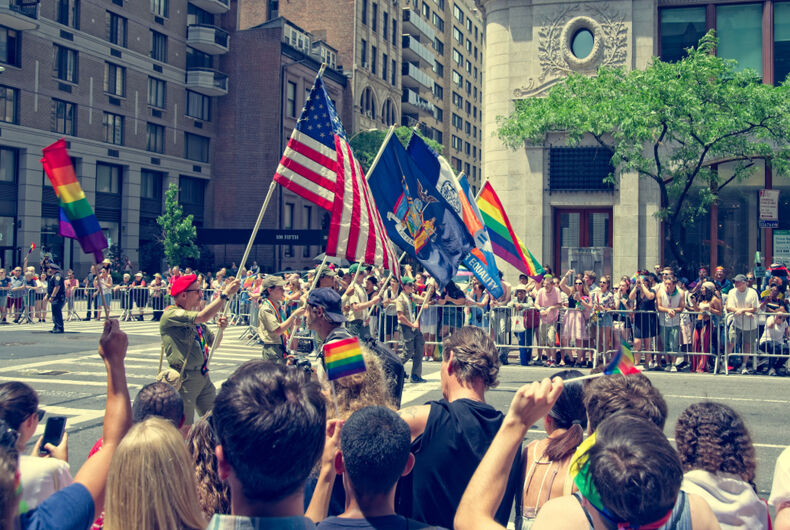 50 years after the Stonewall Riots and we’re still fighting for equality.

A lot has changed in the past 50 years. I was a gay kid growing up in South Dakota who said the words, “I’m gay” for the first time while riding my dad’s John Deer so no one would hear me. 13-year-old-me back in 1996 couldn’t dream of a world where our lives and our love would be part of the American conversation.

It’s hard to be what you can’t see.

When the members of the queer community stood up that June 28, 1969 evening, they might not have realized they were starting the modern LGBTQ equality movement. Inadvertently standing on the shoulders of LGBTQ people who came before them, their protests brought visibility and dignity to the lives of LGBTQ people.

In the years since, the fight to remain visible took on renewed energy. Building community organizations, weaving our stories into popular culture, and electing LGBTQ people across the country was built on a simple goal—that we should all have the freedom to be who we are and love who we love. Bringing visibility to our lives was the first step.

All the stories we told, conversations we had, and campaigns we waged have moved our country forward. When people could see our lives – our pain, joy, anxiety, and aspirations – the cultural and legal conversation moved towards victories. With fits, starts, and inconsistencies, we made inroads towards legal victories, good legislation, and equality.

And people like slightly-older-me could start to see ourselves in the American conversation.

50 years after the Stonewall Riots is a moment to reflect on what the next 50 years will be. The universal struggle to find ourselves on our individual life journeys will continue for generations to come. However, our LGBTQ community must demand more than representation. We need results.

Sometimes it felt like I was right back to riding that lawnmower in South Dakota.

People have a way of proving you wrong sometimes. When I was embraced by the Kalamazoo community and trusted to represent them – the entire community – in the legislature, it was a true honor. As one of three LGBTQ representatives in the Michigan legislature, I’m tasked with not only bringing visibility to our lives to my colleagues in the legislature, but also being an advocate – an advocate for quality healthcare, clean water, anti-racist policies, and yes, LGBTQ equality.

Our community is far from the days of living in the shadows, but to fully take our place in the sun means bringing visibility and evolution to the complexities of our lives.

When Congress passed the Equality Act last month, we saw the next stage of that conversation. For the first time, a comprehensive act passed Congress that would make equal justice under the law of the land for LGBTQ people.

236 members, regardless of their sexual orientation and gender identity, voted yes. They produced results, results that our community demanded.

Sadly my Representative voted no. If you can’t change the mind of an elected official, change the person holding the seat.

Equal treatment under the law isn’t special. It’s an American value that has to be fought for and reaffirmed with every generation. It’s vitally important that we all continue to defend and expand equal treatment, and fight for its inclusion in state code as well as the laws of the United States.

Jon Hoadley is a state representative from Kalamazoo, Michigan. He is currently running for Congress to challenge Republican Congressman Fred Upton. You can follow him on Twitter or Facebook.

Pride in Pictures: London only closes one of their busiest streets once a year & it’s for Pride