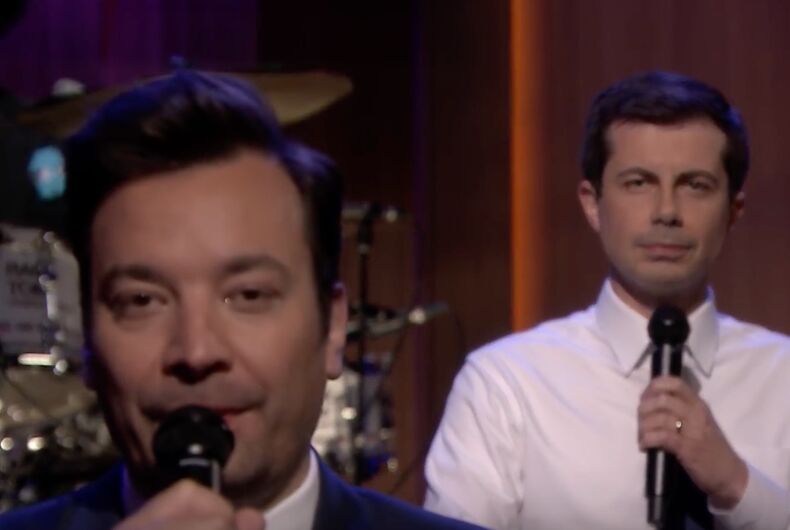 Out presidential candidate Pete Buttigieg appeared on the Tonight Show with Jimmy Fallon last night and his version of “slow jam the news” is all the web’s been talking about today.

The Daily Beast says the humor skit may have launched Buttigieg into the stratosphere in the same way it boosted Barack Obama’s profile further.

Last month, the hosts of Fox & Friends openly worried that Mayor Pete Buttigieg might be the next Barack Obama. Now, Jimmy Fallon may have just confirmed their worst nightmare. On Monday night, Buttigieg joined the Tonight Show host for his latest edition of “Slow Jam the News.”

The recurring bit started as a vehicle for former NBC News anchor Brian Williams and has featured cameos from the likes of Chris Christie and Mitt Romney. But by far the most memorable versions of the musical sketch came in 2012 and then again in 2016 with President Obama joining Fallon and The Roots.

Was it enough to give Buttigieg a leg up over Biden? Probably not, but the jokes all landed and Mayor Pete got his campaign pitch out to an audience that might not be current on presidential candidates – or even realize a gay candidate is in the race.

Buttigieg’s interview with Fallon is well worth the entire watch as they banter about everything from Trump’s new nickname for him to the time he stalked Jerry Seinfeld.