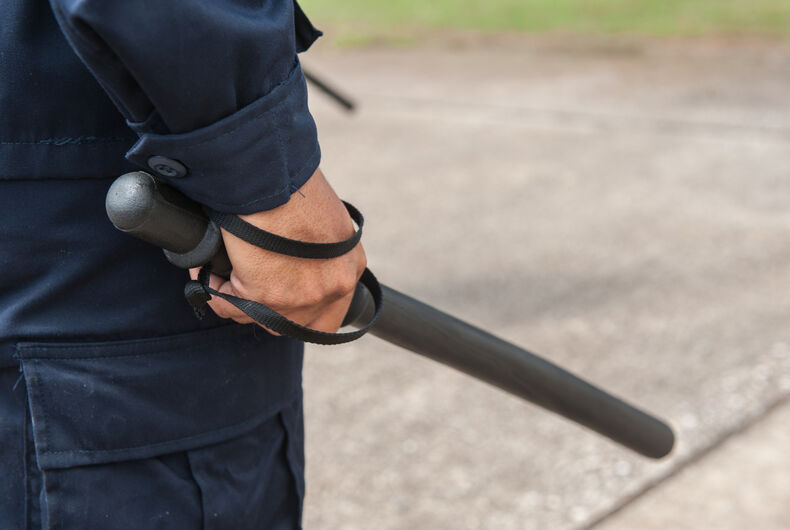 A bisexual man from Kyrgyzstan says he was attacked by several men who carved the word “GAY” in his abdomen after he reported an anti-gay hate crime to the police. He is insinuating that the attackers were officers.

The unnamed man, identified as A.D. by Pink News, said he gave his friend a hug they waited for a cab to take him home when they were set upon by a group of men. The men called his friend by name as they approached and then forced the two into a waiting car.

The men were driven to an isolated location where they were beaten with police batons by their attackers.

“They beat us mostly in the kidneys, stomach and legs with batons, and they left,” A.D. said.

While his friend didn’t want to report the attack to the police, A.D. said he knew the importance of visibility and drawing attention to hate crimes, so he reported the beating and gave descriptions of the attackers. Police said they would contact him if his assailants were identified.

Less than a month later, a man approached A.D. on the street, he says, and identified himself as an officer. He told A.D. that his attackers had been detained and he was needed to positively identify them.

Shortly after getting in the man’s car, A.D. realized something was wrong when another man was waiting inside. They weren’t going to the police station. Instead, they drove him to the outskirts of town where he was beaten and the word “GAY” was carved into his abdomen.

“They told me to get out of the car and started insulting me saying: ‘You damn gay, how dare [you]  write a statement, don’t you understand that no one will not help you, you are a shame for the whole society.’ They said when me and [my friend] die, nobody will bury us like [everyone else],” he told the outlet.

After the men finished belittling him, he says they offered him a bottle of vodka and said they would drink away their differences together.

“I said that I did not drink and [I was] ready to forget everything without drinking. But then the second man hit me hard in the head from behind and I fell,” he said.

“They continued to beat me, they clamped my nose and started pouring vodka [in my mouth]. After that, I woke up in the hospital from pain all over my body, especially in the stomach.”

A.D.’s mother had him moved from a public hospital to a private clinic after hospital staff appeared “reluctant” to look after him. Now, after the attack, he says she’s the only one still standing by him.

“I’ve always tried to hide my sexuality, I often felt like a two-faced man,” he said. “I lost all my relatives and friends, but only my mother does not leave me.”

The man has since fled the country.