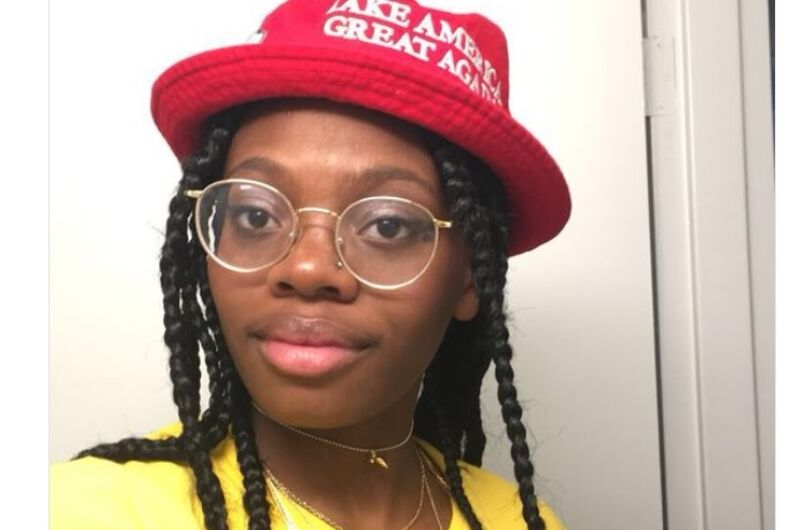 Last week, a black college student said she scammed Republicans out of thousands of dollars by pretending to be a Trump supporter who was rejected by her parents.

Quran, who goes by @chckpeas on Twitter, is an art history student at Howard University.

Considering that exit polls show that very few African Americans voted for Donald Trump, they are also pretty desperate to find some black people to ease their white guilt.

Related: Kanye West says he faces discrimination for not being gay

Quran said that she was hanging out with friends and decided to tweet a pic of herself in a MAGA hat to make fun of people like Kanye West who “walked away” from the Democratic Party.

I will not hide any longer,, the left has made us feel as if us black republicans should hide!! but not anymore!! #BlacksForTrump #WalkAway #maga pic.twitter.com/YA0hnarxaY

The reaction wasn’t what she expected, though.

“It was just straight Republicans all in the comments who were so proud of me,” she told New York Magazine. “It was weird. It was very unnerving.”

Quran then posted screenshots of text messages from her “mother” (she later admitted that she sent the texts to herself) cutting off financial support because of her newfound conservative ways.

this morning is getting worse and worse pic.twitter.com/ktf4fgYib8

“I was at 900 likes. I told my friend, ‘I feel like this is gonna blow up. Let’s try and get some money off these dumb, rich Republicans,” she said.

So she set up a GoFundMe (which has since been deleted) to raise money for tuition.

thank you all so much for your overwhelming support. After seeing this tweet my parents cut me off and refuse to pay my university tuition. So if you can find it in your hearts to help this young, black republican pay for school it would be appreciated 🇺🇸 https://t.co/6HGCAj6aTC

And she got some support.

… Her own family has cut her off and essentially disowned her for coming out in support of our president @realDonaldTrump! Let's welcome her to the Right side!!! @chickpeas #WalkAway #WelcomeToTheFamily #MAGA #KAG #RedWave2018

It only took a few hours, though, for Quran to tell the truth.

Trump is a racist, homophobic, transphobic, bigot AND YOU THINK MY BLACK ASS WOULD SUPPORT THAT ROTTING CARROT?? ridiculous. any black person can put on that ugly ass hat and say #MAGA and yall will instantly be up their ass cuz you wanna prove so hard you’re not racist

She took down the GoFundMe. While there were rumors that she made over $100,000, the exact amount isn’t known and she later told NY Magazine that it was “maybe $200.”

She also said she refunded that money. “I just felt really weird about taking their money. This could go south really fast, I just decided to refund everyone and give their money back.”

Quran has gotten a lot of cheers on Twitter.

“I can look in my DMs right now: ‘I can’t believe you finessed Republicans.’ ‘A true hero.’ ‘Sis, I stan you so much.’ ‘You’re a genius.’ ‘LMFAO, get that bread boo. Keep scamming til that day you die.'”

And she also got some hate from Republicans, who were quick to show their true colors once they found out it was a scam.

let’s also take this time to examine how quickly we decide to be racist because of a person using the system in their favor?? and last time i checked black ppl didn’t steal CONTINENTS of people and enslave them, but i digress pic.twitter.com/XsTZUzW4bi