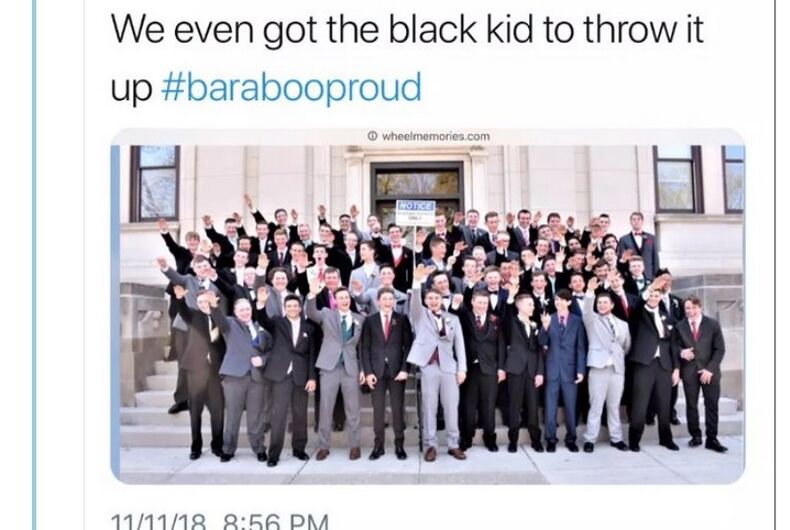 Earlier this week, a picture of a group of high school students doing a Nazi salute went viral.

But one student didn’t go along with his classmates. He’s gay and now he’s speaking out about the bullying he faced from other students.

Students at Baraboo High School in rural Wisconsin tweeted an image of the boys at junior prom holding up one arm in what appears to be a “Sig Heil” salute with the caption “We even got the black kid to throw it up.” A couple of the students are even making “white power” gestures in the picture.

The image has since been deleted from the account.

But one student in the picture wasn’t having it. Jordan Blue, who is in the upper right corner, looked visibly uncomfortable with what his classmates were doing.

Blue said that the photographer told the kids to make the sign, but he didn’t go along.

“I knew what my morals were and it was not to salute something I firmly didn’t believe in,” Blue wrote to journalist Jules Suzdaltsev, who has been talking to people in the school district.

Blue is gay, and he wrote that the boys “have bullied me since entering middle school, I have struggled with it my entire life and nothing has changed.”

I spoke with the only student who is visibly not comfortable with the “salute”, he provided this statement. pic.twitter.com/HbNBc8xLOK

Blue later clarified to CNN that the photographer said to “raise your hand, but he didn’t say a specific way.” He said that he saw the “intent” in their arms and he knew what they were going to do.

The photographer, Peter Guss, denies telling the students to do a Nazi salute, instead saying he wanted “waving goodbye to their parents.”

But the picture looks pretty organized. It’s possible that in the time it took to get everyone in place for the picture, the students organized a Nazi salute themselves and didn’t tell Blue about it.

It’s also possible that some of them planned this in advance.

Suzdaltsev wrote that he has heard a lot about “casual & jokey” hatred in Baraboo.

“Nearly all of the stories echo the same basic theme: the community as a whole has a lot of casual & jokey racism, homophobia, and transphobia that is accepted as a part of life. The school (and other schools in the area) do little to nothing to address these issues.”

But nearly all of the stories echo the same basic theme: the community as a whole has a lot of casual & jokey racism, homophobia, and transphobia that is accepted as a part of life.

The school (and other schools in the area) do little to nothing to address these issues.

The school district says that it is investigating the incident and is considering possible legal action against the students responsible.