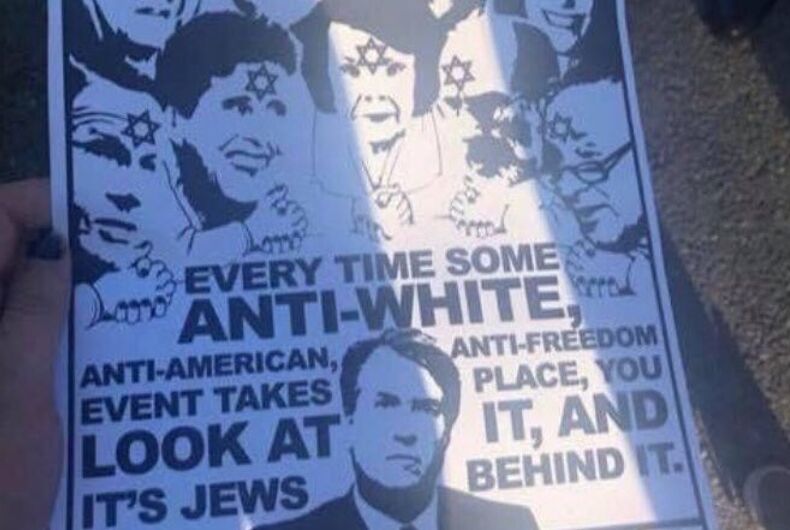 The headline blaming Jews for sexual assault charges against new Supreme Court Justice Brett Kavanaugh blared out in bold capital letters on fliers distributed on University of California campuses and Vassar and Marist colleges in New York state: “Every time some Anti-White, Anti-American, Anti-freedom event takes place, you look at it, and it’s Jews behind it.”

Fliers showed a photo of Kavanaugh surrounded by distorted caricatures of Jewish U.S. Senate members, including Diane Feinstein and Chuck Schumer, with Stars of David branded on their foreheads, plus Jewish billionaire, George Soros, whom the political right has blamed for funding anti-Kavanaugh opposition and allegedly paying protesters.

Above Jewish Senate members, a Kavanaugh accuser, Christine Blasey Ford, and Michael Avenatti, attorney for two other accusers, are portrayed with the words “Good Goy” (good non-Jews) printed on their foreheads.

The fliers say they are “Brought to you by your local Stormer book club.” The Anti-Defamation League describes the chapters of the Daily Stormer Book Club as “small crews of young white men who follow and support Andrew Anglin and his neo-Nazi website, the Daily Stormer,” and that “SBC members present themselves as American Nationalists and are part of the alt right segment of the white supremacist movement.”

Anti-Jewish hatred, while a mainstay of political, religious, and social discourse in the United States, appears nevertheless to be on the rise.

The estimated 1500 neo-Nazi white supremacists blared out the disgusting chant “Jews will not replace us!” as they marched with their tiki torches through the streets of Charlottesville, Virginia, during their 2017 “Unite the Right” protest of the removal of a statue honoring Civil War Confederate General Robert E. Lee.

Related: Anti-semitism: The connection between Donald Trump and Henry Ford

So why do self-described “white supremacists” target Jews, many who appear “white”? The answer, stemming from a long and complex history, is quite simple: Though Jewish people are members of every so-called “race,” even Jews of European heritage (Ashkenazim) have been and still continue to be “racially” othered by some Christian European-heritage communities.

For this reason, members of white supremacist and neo-Nazi groups engage in religious, ethnic, and racial bigotry against all groups they consider non-white, including Jews. In other words, anti-Jewish prejudice and discrimination (a.k.a. anti-semitism) is a form of racism.

One of the many forms it takes is the representation of Jews as dominators and controllers of national and international banking and economic systems, the media, politicians, and other centers of power. Sometimes the warnings are presented in coded language.

“The Washington establishment and the financial and media corporations that fund it exist for only one reason: to protect and enrich itself,” President Donald Trump said at a campaign rally in 2016.”[I]t’s a global power structure that is responsible for the economic decisions that have robbed our working class, stripped our country of its wealth and put that money into the pockets of a handful of large corporations and political entities.”

“This is a conspiracy against you, the American people, and we cannot let this happen or continue. This is our moment of reckoning as a society and as a civilization itself.”

Trump may not have a grasp on the history behind his statements, but he certainly understands how to use the propaganda of fascism to sway public opinion.

Though Jews had little control over their lives in many European countries, the stereotype that they are interested in world domination persists into the modern era.

During his Florida speech, Donald Trump succeeded at having his anti-semitic dog whistle heard; many of his ardent supporters in the racist white supremacist so-called “alt right” received it loud and clear.

Joseph Goebbels, Nazi minister for Propaganda and Public Education, wrote and spoke continually of an alleged “Jewish conspiracy” to undermine German culture and civilization itself.

Speaking at the September 1935 Nazi Party Congress in Nuremberg, for example, Goebbels connected Bolshevism with international Jewry. He warned Nazi party members of a supposed international Jewish conspiracy to snuff out western civilization.

In his article, Lawrence Murray concluded that Trump’s speech was “almost unprecedented in its militancy and vitriol for the luegenpresse (the Nazi term meaning “lying press”) and the brahmins.”

Murray also designated the speech as “88% woke.” (White supremacists use 88 as an abbreviation of “Heil Hitler” since “H” is the eighth letter of the alphabet.) He added: “Can you picture the shvitzing (“extreme sweating” in Yiddish) that must be going on in some circles right now? I can, and it’s glorious.”

“They’re willing to risk World War III for their political objectives in the Middle East, in Israel, and elsewhere.”

The Nazis manufactured “racial” arguments for a philosophical cornerstone as justification for their persecutions of Jews, people with disabilities, and others they considered descendants from inferior “racial strands.”

Nazi leadership argued vehemently that Jews were polluting the so-called “Aryan race.” They forced Jews to wear the yellow Star of David as a signifying marker, since to the Nazis, yellow represented a sign of “race pollution.”

Nations and individuals have constructed many ways to stigmatize, stereotype, and scapegoat Jews and other marginalized groups. Sadly, in Trump’s America, anti-semitism is on the rise as the posters – and Trump’s own words – prove.

He was fired for spreading antigay hate. His former boss just gave him a $1.2 million payday.