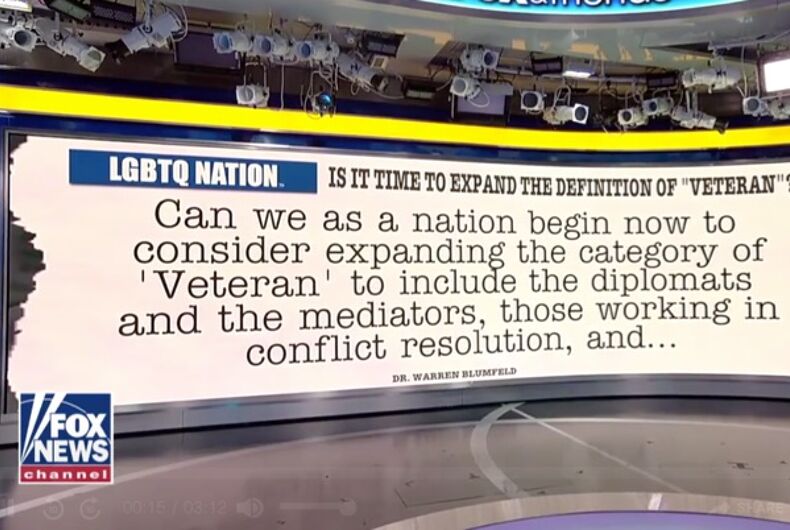 Since writing my commentary, “Is it time to expand the definition of ‘veteran’,” a barrage of people, several men who claim they are military veterans, have sent threatening and vile messages over email and Facebook.

Fox & Friends discussed my essay on their show – and you can imagine how it went. As soon as it aired, the messages started. They came to me, my editor, and my friends. They were left in the comments of the article, on the site’s Facebook page, and my own.

While I fully acknowledged the valuable service of our military personnel to our country’s security and to its very existence in my commentary, I posed a critical question: “Why have we circumscribed the parameters of ‘veteran’? Why, though, have we so limited its definition?”

I argued to enlarge the definition of those placed in the classification.

“Can we as a nation begin now to consider expanding the category of ‘veteran’ to include the diplomats and the mediators, those working in conflict resolution, and activists dedicated to preventing wars and to bringing existing wars to diplomatic resolution once they have begun?” I wrote. “What about the practitioners of non-violent resistance in the face of tyranny and oppression?”

Responding first to my commentary was “Jay” on my email page:

“Stop pushing your liberal crap on us with your new PC version of veteran. Make up you own words, what is it with your liberal that are so desperate to be needed and have titles. I’m so sick of you fucking liberaltards.”

I truly hope yourself and your Disgusting Liberal Trash Friends get the chance be to a Veteran. A Veteran of the Civil War u think u want but will immediately regret as Patriotic American Veterans like myself protect this Nation from Liberal Scum like yourself.
Kiss America’s Ass!”

What would a faggot like you know about combat veterans?”

You sir are a veteran. A veteran of the idiot’s that have ruined this country.”

So you think SJW’s [Social Justice Workers] who would evacuate their bowels if they were dropped into a hot zone should be considered veterans? You are what is wrong with the education system and our country take your socialist rhetoric and pack your shit and head to Venezuela.”

Jason Branstetter, who shared the video from Fox & Friends, telling his followers “this twat waffles profile is public…leave a msg of how stupid this carpet bagger is.”

Fuck you you pansy ass bed wetter…your bitch ass has no clue the sacrifice made to earn that title. So until your willing to give up your comforts, time and possibly your life you can go suck a 45″

When anyone sinks to name-calling and character assassination, dropping figurative explosives on another to kill their points, it can be assumed that the bomb thrower has no means in their arsenal to convey a reasoned and logical argument. Even if these explosives experts are successful in obliterating the messenger, the message will continue and long outlive that messenger.

When ‘Social Justice Warriors’ pass a competency exam, graduate from Boot Camp, learn an MOS, travel to multiple Third-World nations, miss birthdays/holidays/wedding anniversaries, contend with others shooting at you or dealing with indirect fire, or sleeping in feces-covered fields outside Baghdad I’d still state you have no reason to call yourself a ‘Veteran’ as that is ours alone. You have no clue what military personnel endure so that you can sit in your ivy-covered hall and commensurate about such unmitigated trivia.

Wannabe ‘veteran’ to cashier: Do you offer a discount to veterans?
Cashier: Yes
Wannabe ‘veteran’: I’m a veteran.
Cashier: Thank you for your service. I did a couple of tours in Iraq; I sure hope your time in the service was a bit more fun than mine (chuckles). Can I see some sort of ID, please?
Wannabe ‘veteran’: (Puts on ‘pussy hat’) I wore this to Trump’s Inaugural.
Cashier: ?????”

Either “Oldhawker” did not read my commentary or did not take literally when I wrote, “To be clear, I am not arguing that everyone be granted retail discounts by expanding our classification of ‘veteran,’ or even that others acknowledge us for our service in working for a better and more just society.”

Another alleged veteran whose posting on my Facebook page I deleted because it was so threatening and offensive asserted that he joined the military to serve the nation and to “defend the Constitution.”

Does this signify also defending the rights of other people to express their constitutional rights?

I cannot remember a time in my 71 years on this planet when our country has been so divided, so uncivil, so sheltered in exclusive siloed corners.

I understand that I seemed to have excited the third rail in political discourse by questioning how our society constructs its definition of “veteran,” and by asserting for its expansion.

For the United States to evolve, however, we must provide a forum for reasoned and respectful discussion without attempting to inject mortal venom into the veins of those with whom we disagree.

While venom may protect and prolong the lives of snakes, it terminates human dialogue, a dialogue which can ultimately give birth to understanding.