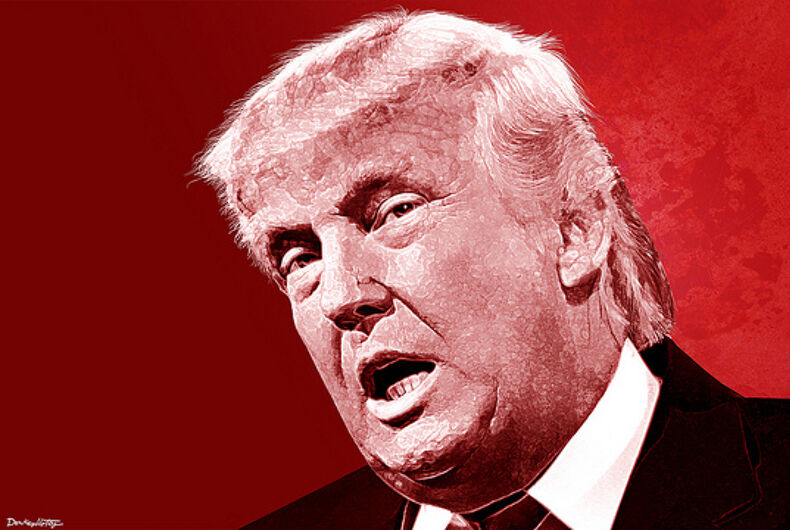 President Trump’s proposal to erase the existence of transgender people is only the latest in an endless string of attacks on LGBTQ rights. Even before his latest assault, Trump had accumulated a depressingly long list of victories in his war against the community.

So it would be tempting to conclude that at this point Trump has run out of damage to inflict.

In fact, the hate fest is far from over. There’s still plenty that Trump and his far-right flunkies can do. Some of those efforts are already underway; some are just a glimmer in the religious right’s eye. All of them are real risks to become reality.

Here’s a rundown of just some of the potential battles that we are still to face at the hands of Trump.

Enshrine discrimination by conservative Christians. Out of all of the terrible things on the horizon, this one has the most far-reaching implications.

At issue is the right for anti-LGBTQ evangelicals (or frankly anyone) to discriminate in housing, employment and services if they cite religious grounds. The religious right calls this religious liberty, but it’s simply legalized discrimination.

Limit marriage rights. Trump won’t be satisfied with a Supreme Court ruling clearing the way for discrimination on religious grounds. He will use the power of the government to chip away at other marriage rights.

The federal government is already running roughshod over the rights of immigrants married to American citizens; it’s not a stretch for Trump to start focusing on domestic couples.

The Obama administration was quick to declare that same-sex couples were entitled to the same rights as heterosexual couples. However, that conclusion covered a myriad of federal agencies and regulations, and sometime relied upon how the agency chose to rule.

Under Trump, those agencies could always revisit their original ruling and reverse them, affecting anything from taxes to federal benefits.

Make HIV a pre-existing condition. Trump wants nothing more than to repeal Obamacare, but since Congress wasn’t willing to cooperate, the White House is doing as much damage as possible on its own.

That includes getting rid of protections for people with pre-existing conditions — like HIV. Insurance companies would be able to deny coverage for anyone with HIV or, if they offered coverage, would be able to charge a lot more for it.

Eliminate any federal funding for LGBTQ issues. Trump has already taken money away from HIV programs to pay for his policy of separating children from parents at the border. He’s cut way back on other LGBTQ health programs.

With Republicans already making noises about cutting federal programs to pay for their tax cuts for wealthy Americans, zeroing out funding on LGBTQ health issues would be an obvious goal.

Give federal backing to conversion therapy. As its anti-trans policy highlights, Trump’s Health and Human Services Department is carrying water for the religious right. Throwing the administration’s weight behind conversion therapy would be another gift to conservative Christians.

Even though states keep banning the discredited therapy for minors, the federal government can throw federal dollars at it, either to study its effectiveness or just in outright support.

Conversion therapy is a cause near and dear to Vice President Mike Pence’s heart, so it already has a powerful backer in the White House.

Of course, there’s even more that Trump could do – look the other way if another country begins a violent purge of LGBTQ citizens, appoint even more haters to the federal bench and federal government, start attacking us as yet another “enemy of the people.”

With fewer and fewer constraints and no interest in doing anything other than pandering to his evangelical base, there’s no end of what Trump may decide to do.

As hard as it is to believe, the worst may still be yet to come.

It’s time to get educated about ‘intersex’ people

This historical painting shows a celebration of gender diversity. The title is a slur.