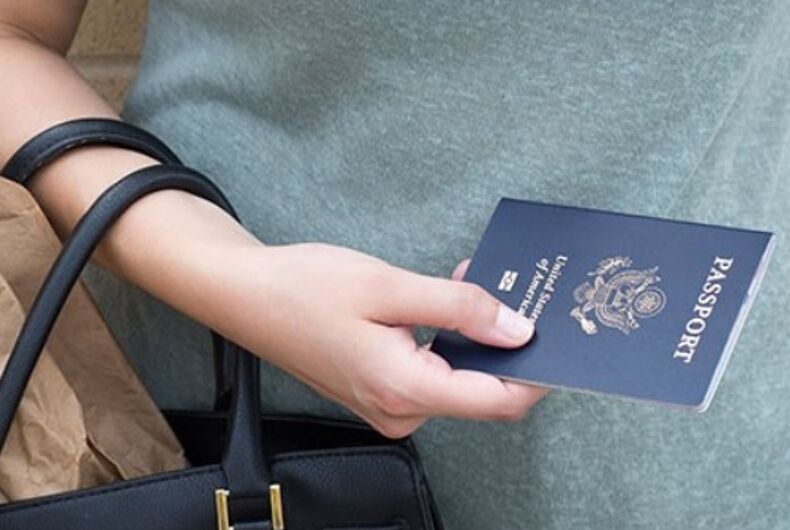 An Obama-era State Department webpage that explains the process for correcting the gender marker on a passport has been altered in a way that’s worrying LGBTQ advocates.

In 2010, when Hillary Clinton was Secretary of State, the State Department lifted the surgery requirement to correct the gender marker on a passport.

A webpage was created to help transgender people navigate the process, which then required a doctor to sign a letter saying that a person has undergone “appropriate clinical treatment for gender transition.”

The National Center for Transgender Equality (NCTE) noticed that the website was altered on Wednesday. The procedure hasn’t changed, but a lot of the language was changed to make the page more hostile to transgender equality.

In an archived version of the page, it says that it is about “gender transition.” Now, the page says “sex change,” an outdated expression that the GLAAD Media Reference Guide emphatically tells people to avoid.

The page also now refers to the gender marker as a “sex marker,” and other references to gender have been changed to “sex.” It refers to “your new sex” in a sentence where no parallel expression was previously used.

Links to the American Medical Association (AMA) and the World Professional Association for Transgender Health (WPATH) websites were also removed from the webpage, as well as a statement that the WPATH is “recognized as the authority in this field.”

One change shows that the revisions are ideological in nature.

The old version of the website had a question about non-binary gender markers on passports in the FAQ, and the answer was short and direct: “No, the only genders available for a passport are male and female.”

While that isn’t the answer some people would like, at least it avoided the statements made in the new version: “No, the only sex markers available for a U.S. passport are male and female. A U.S. passport does not list the bearer’s gender identity. The sex marker on your U.S. passport is based on your evidence of U.S. citizenship and identity, including a medical certification of sex change. The sex marker may not match the gender in which you identify.”

“While ultimately pointless, this move seems designed to frighten, confuse, and keep transgender people from exercising their full rights under the current policy — the same policy we fought for and won in 2010,” NCTE Executive Director Mara Keisling said in a statement.

“Transgender people can and absolutely should continue to update and renew their passports. That is our right and that should always be our right.”

The policy is the same, but considering the Trump Administration’s previous attacks on transgender equality, these revisions could be a sign of policy changes to come.