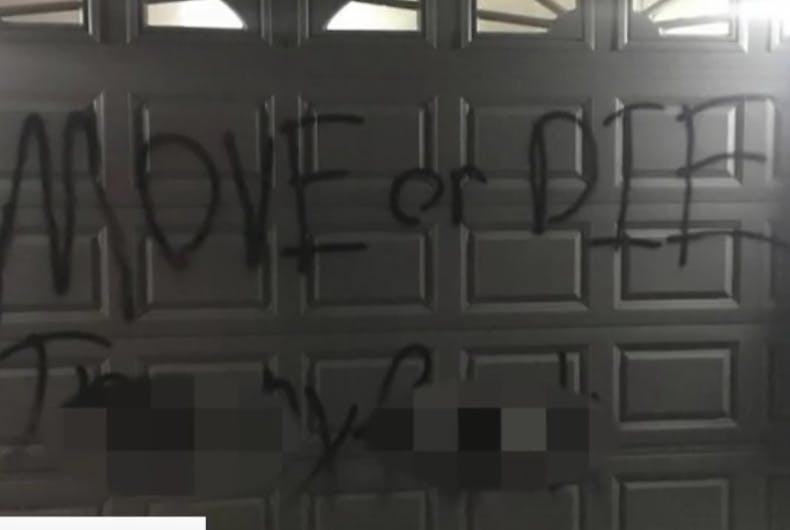 After a trans woman was threatened in her home last week, their neighbors rallied.

Liz Abel and her wife Alecia live in Newberry, a town with a population of 6000 in northern Florida. Alecia started transitioning a few months ago, and last week someone left them an anonymous note that said “Move or die.”

On Friday morning, the Abels were woken up by an Alachua County deputy.

They went out to find that “Move or die, tranny fuck” was spray-painted in huge letters on their garage door.

Liz said that she was surprised by the support she got from their neighbors, who offered food and said they would paint the door and install a security camera.

Newberry Mayor Jordan Marlowe also called them to apologize for whoever did the vandalism.

“When I called them, first and foremost, I wanted to know that they were safe. I have respect for [the sheriff’s office] but I wanted to be sure they were taking the threat seriously and everything that could be done to ensure their safety was being done,” Marlowe said.

“I wanted to make sure they understood that there was no room in their elected representatives’ hearts for this kind of behavior and message.”

Another resident of Newberry happens to be transgender activist Melina Farley-Barrat, and she organized a protest against anti-transgender violence.

“It’s about changing the culture, people like us who have the ability to show up and be present and say I’m here and I count and I matter,” she said. “That’s important for those that just don’t understand to be able to learn from and if we don’t do that then the culture doesn’t change.”

Liz said that the couple has no plans to move, but she had some choice words for the anonymous vandals.

“For the most part, I feel people fear what they don’t know and they choose to lash out to make themselves feel better,” she said. “They feel justified in their actions without recognizing their immorality.”

Why Obama is better than Trump, from A to Z

An emcee at an LGBTQ conference said ‘Ladies and gentlemen, things and its’