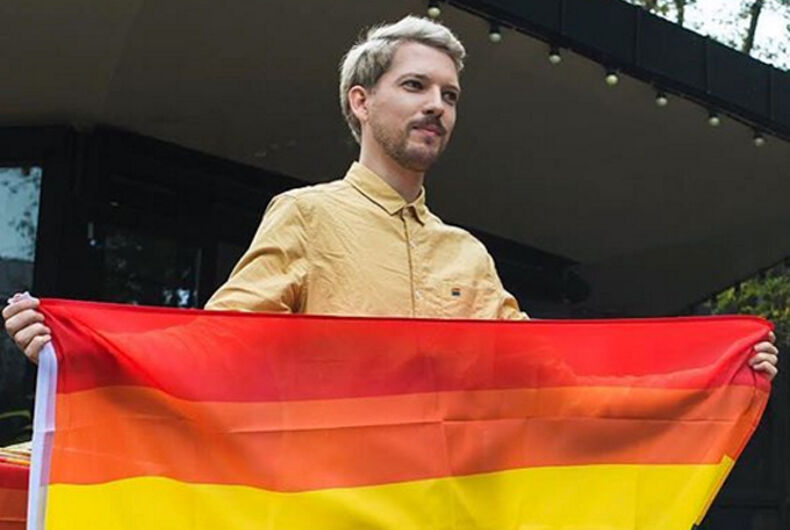 A suspected arson attack against a gay filmmaker in Lithuania has led to a sea of rainbow flags around the capital of Vilnius (estimated population: 574,147).

Police warned 28-year-old film director, screenwriter and producer Romas Zabarauskas that his rainbow flag likely led to a fire in his apartment complex.

The fire, which was later estimated to have been deliberately set, damaged the apartment of a neighbor of Zabarauskas. It is being investigated as a hate crime.

The attack is the second in recent weeks, with a similar arson attempt occurring at the headquarters of the Lithuania Gay League. That fire caused minor property damage to the doors and exterior blinds of the league’s headquarters.

Rather than bowing to homophobia in the wake of the attack, Zabarauskas joined with Lithuanian human rights advocate Tomas Ilja. Together they raised enough Euros to buy 500 more flags, and then distributed them for free around Vilnius.

The duo also encouraged others in Lithuania to hang their own rainbow flags, and to share their photos on social media with the hashtag #LGBTdraugiškaLietuva, which translates to “LGBT Friendly Lithuania.”

Zabarauskas has been very encouraged by the response to their actions.

“I actually am very proud that we unfurled the rainbow flag,” Zabarauskas shared with the Calvert Journal.

Zabarauskas added, “I’m happy to see rainbow flags in three buildings surrounding mine. This gives me comfort, a sense of security and pride. There are and will be criminals in every society, but it’s important how we react to them.”

After 4 possibly homophobic attacks, we answered w/ ❤️ Lithuania is a free country and we are showing it with pride! 🇱🇹🏳️‍🌈 Photo by @arcana_femina

Read about our rainbow success on @calvertjournal 👏🏻 If you're in Lithuania, buy a rainbow flag at @nebegeda shop and unfurl it with #LGBTdraugiškaLietuva 🏳️‍🌈 Photo by @arcana_femina

Twitter is blowing up with these Spider-Man pride flag screenshots