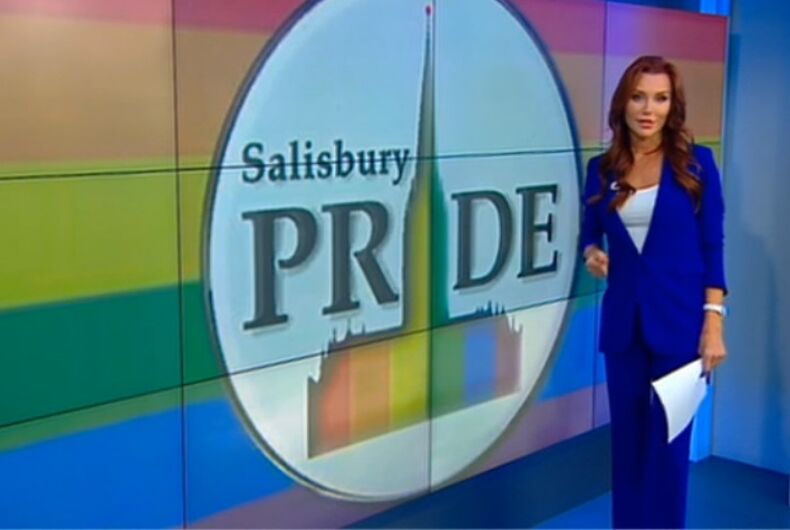 Two men who are accused by United Kingdom police of being spies who tried to kill a former Russian soldier have become the center of speculation over their sexuality in Russian media.

Law enforcement in the UK believe that Alexander Petrov and Ruslan Boshirov went to Salisbury, England, this past March in order to kill Sergei Skripal, a former Russian colonel who spied for the UK, but failed and ended up killing a woman they didn’t even know.

UK police believe that they traveled from Russia with a bottle of Novichok – a Soviet-era nerve agent – and spent about two days in a cheap hotel in East London this past March. They then went to Salisbury twice to allegedly try to kill Skripal.

Police believe that they put the Novichok on Skripal’s door handle, poisoning him, his daughter, and a police officer who also touched the door handle. All of them have recovered.

But the Novichok – which was stored in a bottle of Nina Ricci’s Premier Jour perfume – ended up three months later in a thrift store and a man bought it as a gift for his partner, who sprayed the nerve agent on her wrists and died.

The two men were back in Russia at that point and they have become the center of an international incident.

Last week, a surreal interview of them appeared on RT, a Russian state-sponsored media outlet. Talking with RT Editor-in-Chief Margarita Simonyan, they said that the entire thing was just a bizarre set of coincidences, that they were in Salisbury as tourists and somehow they’re being accused of an attempted assassination.

Simonyan, though, wanted to know more about their travel accommodations. The two spent a weekend in a hotel room together, on vacation, they said.

“Speaking about normal men, on the security video you are shown always together,” Simonyan said. “You were together, lived together, walked everywhere together.”

“What does in fact connect you?” she asked.

“Let’s not pry into our private lives,” Boshirov responded.

“No need to justify yourselves. Whether you had a single or double bed is the least of the world’s concerns right now,” Simonyan said before moving on to other topics.

That was enough to start speculation in Russian media.

“The LGBT community has come out in defense of Petrov and Boshirov,” was the headline on Life News‘s website, a Russian 24-hour news channel.

“Instead of dangerous killers – timid gays,” a column in the conservative paper Zavtra said.

Moskovsky Komsomolets, a daily paper, blared: “The GRU’s coming out.” (The GRU is a Russian military intelligence agency.)

Rossia 24, a major news channel, aired a report about Salisbury’s “modern European tolerance,” as if the town of 40,000 is full of gay bars and clubs.

Hours after the #Skripal suspects' farcical interview, a flagship news program on Russian state TV broadcast a lengthy rant about #Salisbury's spirit of "modern European tolerance", portraying it as a city overrun by gay clubs and parades. https://t.co/h7jGytGio2 pic.twitter.com/RiFaIxtFUI

Simonyan, 38, hasn’t stayed away from fanning the rumors. “I do not know if they are gays or not,” she said.

“They are quite fashionable – with little beards, hair cuts, tight pants, sweaters tight over big biceps. They did not harass me. Anyway I’m already out of the harassable age.”

Because if a man doesn’t harass every woman he sees, then he’s gay?

And there are a lot of words to describe their sweaters in the RT interview, but “fashionable” isn’t one of them.

Russian blogger Rustem Adagamov said that the point of portraying them as gay is to punish them for failing to assassinate Skripal, as well as to back up their cover story, since two gay men couldn’t possibly be spies.

“To punish Petrov and Vasechkin for their failure to execute, they’ve clearly decided to [provide a cover story for] them as a couple of gays,” he wrote.

Prime Minister Theresa May insists that there is a mountain of evidence against them – including security camera footage putting them near Skripal’s home but far away from any tourist destination in Salisbury. Vladimir Putin, though, denies that they are anything but the fitness instructors they claim to be.

‘Vampire facials’ spa shuts down after exposing customers to HIV