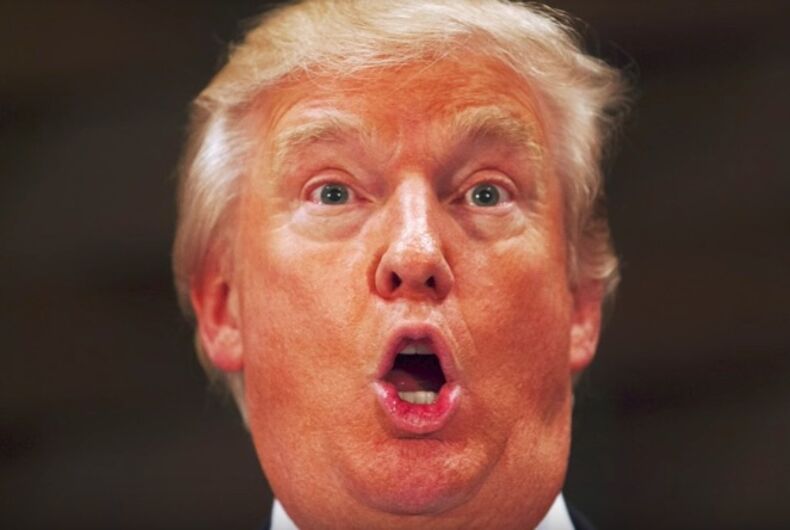 We live in times in which we witness the promotion of the promise of a mythological retro-era where white picket fences enclose all-white cookie-cutter neighborhoods.

A time where, ironically, rugged individualism stands supreme and the easy ownership and carrying of limitless firearms is understood as an undeniable right and as a litmus test for the realization of freedom and liberty.

We live in times where men are kings of their castles, women are their willing and loyal subordinates, and children are silent; where people of color are depicted as either gracefully and gratefully serving their master-employers, or as vicious animals bent on the destruction of the country and its good people.

We live in times when “protecting and defending the Constitution” is translated into turning lawful peaceful protesters into disposable deportable felons while protecting and rewarding foreign invaders of our democratic processes.

A time where athletes, “radical Islamist terrorists,” in fact all Muslims, as well as people of color, “illegal aliens,” people with disabilities, and trans people are villainized.

We live in times where international allies are disparaged and abandoned, and enemies are valorized; when fascist dictators are seen of faultless role models to be emulated and honored; and when our government prematurely terminates successful agreements in the deceitful name of “preserving national security.”

When the opposition is expected to bow in respect to authority, when divide and conquer is the strategy of convenience and option of first resort, and when bullying now is referred to as obligatory essentialized masculinity.

We live in times when foreign policy is made up on the fly, and when study and preparation is tossed out in favor of winging it.

When domestic policy is interpreted as attacking and dismantling democratic institutions and all else relegated to the states to implement and fund.

We live in times where “hope” is a four-letter word, reason has entered the list of endangered species, morality has gone out the window in the name of expediency, when mediocrity is now top notch, truth is fake, lies are “alternate facts,” and “truth is not truth.”

When persons of power and privilege position themselves as innocent and unwitting victims, when breaking and ongoing scandals and investigations are commonplace, and common decency is nowhere to be seen.

In times where fascism is translated as populism, and where extreme nationalism becomes patriotic. When womanizing and admitted assaults are dismissed in the language of doublespeak as “locker room talk” and “nobody respects women more than me.”

We live in times when uncritical and mindless subservience to leadership becomes patriotic duty, when human and civil rights are entitlements given and taken away on a whim, and when standing and saluting are mandatory requirements for residency.

We live in times when nepotism is reframed in terms of having a strong resume, when narcissism now means serving the public good, and possessing a sociopathic personality is now seen as having the proper character and temperament credentials for the responsibilities of governing.

When up is now down and going backward is seen as progress; when corporate bankruptcies, stiffing contractors, and lawsuits and convictions of racial discrimination in housing are translated as “the art of the deal;” when America isolated and alone is called “America first;” and when selling snake oil is framed as “you will get tired of winning” because “I alone can do it.”

We live in times when spinning the truth and twisting the facts into pretzels gyrate to the point of nauseous dizziness, and when attacking the free press as “fake news” is framed as being “open and transparent.”

We live in times when the quest for the oval office is only for personal and professional enrichment; when throwing people under the proverbial bus is the new form of dedication, trust, and loyalty; and where hyperbole becomes reasoned statements.

When promises are not met, blame is never taken, responsibility is not accepted, and apologies are never given, though credit for successes, whether deserved or not, are always claimed.

We live in times when “hiring the best and the brightest” is, rather, tapping into the wealthiest and most inexperienced whose stated or hidden purpose is to eliminate the very agencies and institutions they are meant to lead.

But now, one (or a composite) of these “best and brightest” has come forward (anonymously) in a blistering New York Times op-ed to blow the lid off the massive deceptions perpetrated by Donald J. Trump.

The author attempts to reassure the public “that many of the senior officials in his own administration are working diligently from within to frustrate parts of his agenda and his worst inclinations…” and that “…we [vow] to do what we can to preserve our democratic institutions while thwarting Mr. Trump’s more misguided impulses until he is out of office.”

While these “senior officials” worry about their boss’s “impulsiveness,” “reckless decisions,” and “amorality,” they appear to fully embrace his policy agenda.

“Don’t get me wrong,” continues the editorialist. “There are bright spots that the near-ceaseless negative coverage of the administration fails to capture: effective deregulation, historic tax reform, a more robust military and more.”

So, these officials accept and support Trump’s calls for “energy independence” as nothing more than coded language for sustained reliance on cheap and seemingly limitless fossil fuels phrased as a source of “clean” energy in the service of corporate profits over health of the planet.

When “trickle down” amounts to the digestive waste of the upper echelons and “middle-class tax cuts” are, in fact, government welfare for the super-rich.

And when healthcare is your own responsibility in these times of resurrecting the notion of meritocracy: that deceptive promotion that individual success or failure is totally dependent on one’s abilities, motivation, and work ethic alone regardless of personal backgrounds or social identities.

We have long known that Donald Trump is a liar and a racist narcissistic neo-nationalist. Republican leaders, in fact most of the Republicans in Congress and their supporters, have functioned as enablers and are themselves co-conspirators!

“Enabler” is the term given to those who fail to act to deter and help abusers.

“Passive bystander” or “bad Samaritan” are the names for people who are conscious of bad actions developing around them but fail to intervene.

Enabling and passively standing by take many forms, including literally offering an addict substances or conspiring with an abuser in a sinister plot, contributing to the denial of addicts and aggressors by asserting that they don’t have a problem, to downplaying the seriousness and making excuses for their behaviors, translating for others what the person “really meant,” downright lying, and so on.

Sarah Huckabee Sanders, Trump’s Minister of Propaganda and Disinformation, frequently verbally attacks members of the press at her White House press briefing for asking questions that may in any way challenge the president’s reasoning or truthfulness.

How do Trump’s enablers sleep at night and get back up in the morning still willing to degrade and prostrate themselves by attacking our democratic institutions and seriously dismantling our country’s standing in the world?

Every time anyone enables an abusive action, they keep perpetrators and themselves further from the truth and from help, and they diminish themselves and their integrity more than just a bit.

The author of the anonymous op-ed sought to soothe the public by writing: “It may be cold comfort in this chaotic era, but Americans should know that there are adults in the room. We fully recognize what is happening. And we are trying to do what’s right even when Donald Trump won’t.”

Well, anonymous supposed “senior official in the Trump administration,” this is simply much too little, much too late! You have blown the lid off nothing.

The so-called “fake news” and “failing New York Times” have acted tirelessly in exposing the truth about Donald Trump and his administration long before his descent down his tacky golden escalator in Trump Tower to announce his demonization-of-Mexicans run for the Republican presidential nomination in 2015.

The best and the brightest never considered entering the depths of the swamp Trump has restocked in his quest for power and treasure. You, op-ed writer, and your cohorts, are too immersed and covered with slime to have much credibility.

You would do well to study John F. Kennedy’s pivotal book Profiles in Courage to begin to get an idea of what courage really looks like since you will never find yourself included in the special and admired group of “The Courageous.” And come out of your closet of anonymity along with the other so-called “adults” into the bright rays of truth and transparency.

I put my truth, however, not in you, but rather with the new generation of youth leaders who are stepping up, taking over, and committing themselves to a better future than the one “adults” have left them.

Twitter banning Alex Jones for life is nice, but it should just be a start

These drag queens said ‘Yes to the Dress’ Vegas-style