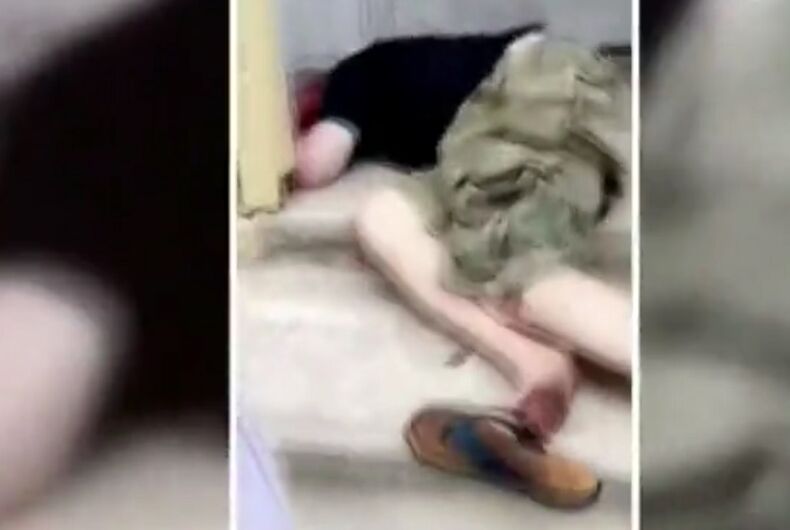 Police say that a gay man in New York suffered extensive injuries and almost died after he was beaten this past weekend.

Albany police arrested Hubert Dabbs, 37, in connection with the beating of a gay man.

Police say that this past Saturday at around 3 p.m., Dabbs repeatedly stomped on the victim’s head on the steps of an apartment complex.

They responded to a report of an unconscious person, and bystanders were able to point police to where Dabbs went and he was immediately arrested.

A bloody footprint was found on the apartment building steps.

“He was almost dead,” said Guryam Singh, who owns a small store near where the attack happened. Singh’s surveillance cameras caught the beating on video.

“Without reason, he just started beating him up,” he said. “He was [kicking] him in the forehead.”

The victim suffered severe facial fractures, lacerations in the head, and swelling in his brain. He also lost one of his ears in the attack.

His condition is no longer considered life threatening by the hospital that’s treating him.

Police say that Dabbs and the victim knew each other, but didn’t specify how. They believe that the attack was motivated by anti-gay bias.

“It’s believed that Mr. Dabbs was assaulting the man due to his sexual orientation, being that the victim is homosexual,” an Albany police spokesperson said.

Dabbs has been charged with attempted murder with a hate crime enhancement.

“The guy was very nice,” Singh said of the victim. “He always came by and bought beers and soda. He never bothered nobody.”

“Something to this degree in the middle of the afternoon is really chilling,” said Martha Harvey, executive director of the Capital Region Pride Center.

“It also has a way of permeating the entire community and it makes everyone feel unsafe,” she added.