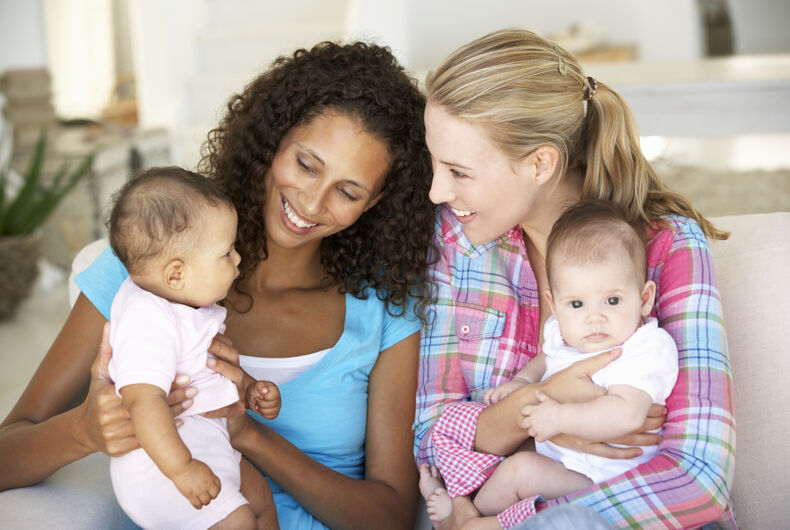 In the longest-running study on the issue to date, researchers have shown that kids raised by lesbian moms show no significant mental health issues.

“In a large, prospective study involving 25-year-olds with sexual-minority parents, there were no significant differences in measures of mental health between those who were conceived through donor insemination and enrolled before they were born and those in a U.S. population-based normative sample,” said the study’s authors, Nanette Gartrell, M.D., Henny Bos, Ph.D., and Audrey Koh, M.D.

The study has followed the same mothers and their children since the 1986. In the findings, published in the New England Journal of Medicine, researches discovered that the children of these mothers were faring as well or better than others of their age.

While the oldest of these children are well into adulthood, the study’s findings show that even young adults are faring well in lesbian households.

The study, in conjunction with another recent study covering gay and lesbian parents, flies in the face of erroneous notions that children need mixed-gender parents for better mental well-being.

“These findings demonstrate that claims that it is harmful for children to be raised by same-sex couples are completely unfounded,” Bos stated. “There is no justification to restrict child custody or placement, or access to reproductive technologies, based on the parents’ sexual orientation.”

The study started with 154 prospective mothers within 84 lesbian families who were in the midst of conceiving children via donor insemination in three U.S. cities. The study also included 77 offspring from these mothers.

“When I began this study in 1986, there was considerable speculation about the future mental health of children conceived through donor insemination and raised by sexual minority parents,” said Gartrell. “We have followed these families since the mothers were inseminating or pregnant and now find that their 25-year-old daughters and sons score as well on mental health as other adults of the same age.”

While the overall sample size is small, urging caution from the study’s authors, the length of time the study has been running provides additional faith in the results.