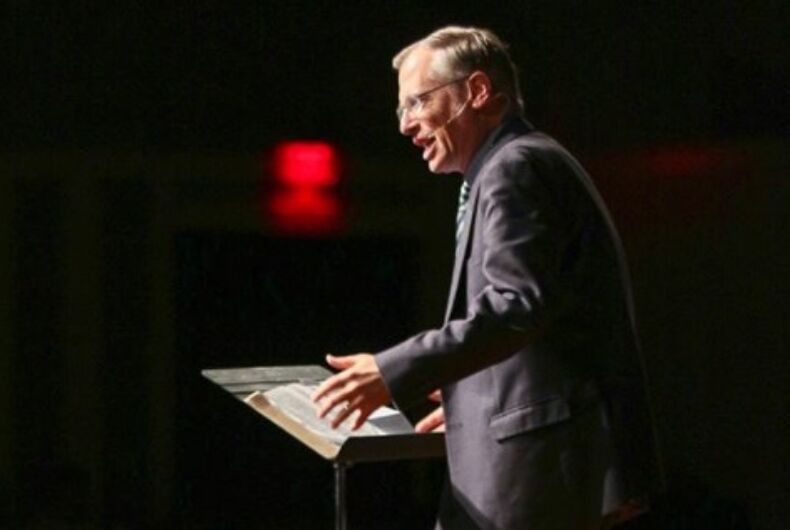 A seventh person died in a northern California wildfire yesterday while additional fast-growing wildfires expanded nearby. As if the death toll weren’t enough of a stressor for the families, now a pastor from Colorado is blaming the entire tragedy on the gays.

We’ve all heard this before. By the same guy, actually.

Remember that time “Execute the Gays” pastor Kevin Swanson made the anti-LGBTQ statement that Hurricane Harvey was a “punishment” from God for Texas rejecting an anti-trans law? Or how about that time he said that public schools would turn students into transgender communists?

So do we. Those things really happened.

In 2016, Swanson made the lunatic case that Girl Scouts leaders should be drowned for being too pro-gay.

So what exactly did he say about the California wildfires being property of the LGBTQ community? Well, this right here.

“If you look at the history of California, they have been at the forefront of this,” he said. “The first gay pride march occurred in San Francisco in 1970 and then San Francisco legitimized homosexuality in 1972. In 1982, Laguna Beach, California, elected the first openly homosexual mayor in United States history. In 1999, California adopted a domestic partnership law; I believe it was one of the first in the nation to do that.”

“In 2005, California state legislators became the first in the nation to pass a same-sex marriage law…In 2008, the California Supreme Court then struck down Prop 22 in regard to marriage cases, and Prop 8 also was struck down later on that year, I believe,” he said.

He went further, “And then, in 2017, the California state schools implemented the homosexual indoctrination program…and that was the kickoff for the biggest fires that California has ever seen in its history.”

To put it plainly, he examined, “So God is burning down California in 2017 and 2018 after about 25 years of leading the pack to legitimize the sin of homosexuality in that state.”

For the record, sane experts say the California wildfires that have so far killed 11 people, injured 10 and caused more than $400 million worth of damage, were not designed by the LGBTQ community. In fact, the wildfires are most likely due to climate change.

Can Dems reach the movable middle to overturn America’s Bully-in-Chief?