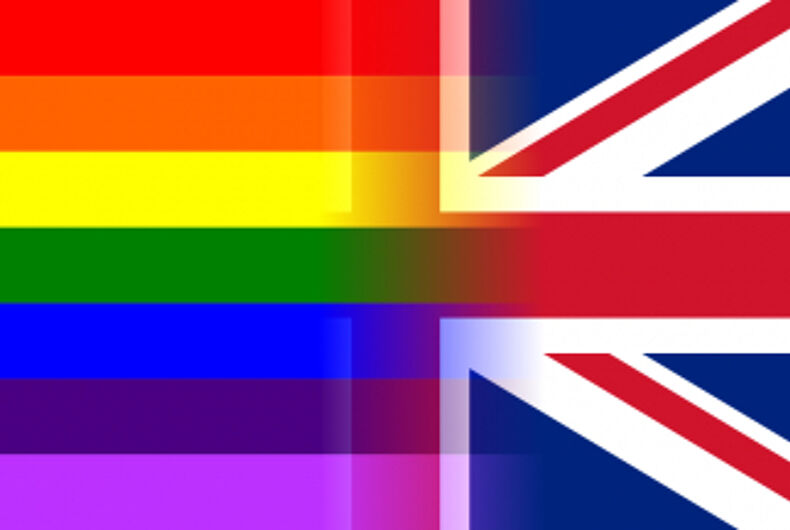 The British government has announced plans to ban conversion therapy in a sweeping LGBTQ initiative.

To support transgender citizens, it also plans to launch a consultation this fall on how to legally change gender.

The plans are part of a $5.9 million, 75-point initiative to make society more inclusive for LGBTQ people.

Prime Minister Theresa May expressed her support of the project.

“No one should ever have to hide who they are or who they love,” she said.

The government announcement specifically targets so-called conversion therapy, a practice denounced by medical and psychiatric groups. It said it will “eradicate the abhorrent practice.”

The British initiative stands in stark contrast with the state-by-state approach in the United States. Thirteen states, the District of Columbia and a number of municipalities and counties have banned the practice among licensed mental-health practitioners.

However, U.S. religious groups aren’t necessarily affected. Vice President Mike Pence once endorsed the practice for his Congressional campaign (he claims he didn’t), and Republican Party state platforms continue to endorse it (including Texas).

In a Twitter thread Tuesday, British journalist Patrick Strudwick, LGBT editor for BuzzFeed UK, described the sweeping changes — and his own role in the long-sought changes.

“Today is very strange for me. The government has announced it’ll ban conversion therapy,” Strudwick posted. “Nine years ago I subjected myself to it, going undercover to investigate conversion therapists. No UK journalist had done this before. No one knew what was going on. This is what I learned.”

The 13-part thread — and Strudwick’s investigative reporting — lays out both the dangers and the damage from the practice.

“I have seen, and felt, the damage it does,” he wrote. “After my investigation came out, I was flooded with emails from around the world. They told me about the suicide attempts. I saw the self-harm scars.

“The government needs to understand the scale of conversion therapy. It isn’t just restricted to therapists, it infects a range of religious organizations, often in private.

“In the end, the very idea needs to be attacked. Love needs no cure.”

The government said it would consider “all legislative and non-legislative options to prohibiting, offering or conducting conversion therapy.”

The report noted that religious organizations were by far the most likely to carry out the practice, either by force or voluntarily. It can range “from pseudo-psychological treatments to, in extreme cases, surgical interventions and ‘corrective’ rape.”

The formal consultation on gender changes was delayed for months. Anti-trans protesters said it as an attack on women’s rights, and LGBTQ organizations are bracing for further backlash, Strudwick reports for BuzzFeed UK.

Current government practice relies upon medical letters, and thus trans people are at the mercy of doctors’ varying opinions. The prime minister said she wants that procedure improved.

“I want to see a process that is more streamlined and de-medicalized,” May said. “In response to our national LGBT survey, trans people have told us that the current system to legally change their gender isn’t working and they find the process bureaucratic, costly and intrusive.”

Prompting the U.K. plan was an extensive government survey of 108,000 people, from July to October 2017. Of the respondents, 61 percent identified as lesbian and gay, 4 percent pansexual and 2 percent asexual. Transgender respondents numbered 13 percent.

Of the respondents, 40 percent said they had experienced hate incidents, with 90 percent of most serious offenses going unreported.

The news has a key LGBTQ leader optimistic. Ruth Hunt, the top executive of the LGBTQ rights charity Stonewall, told the BBC she was pleased the government was listening to the community.

But, she said, there was “still a long way to go until we reach full equality.”

This safe sex video game cut STI rates, according to a new study