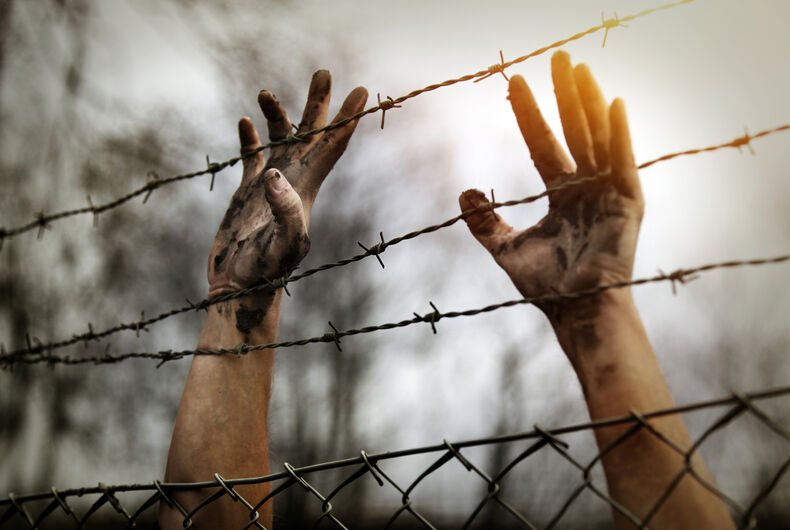 Emma Lazarus, who’s proud and shining words stand indelibly inscribed on the pedestal of the Statue of Liberty, would weep in sorrow and shame if she were with us today as an ever increasing number of our political “leaders” and citizens call for the United States to extinguish the flame of liberty on refugees of war and crime.

Not only does humanity forget our history, we enter a state of collective amnesia that has deadly consequences.

In the year 1939, for example, just before the breakout of war in Europe and prior to our country’s entry, for some refugees, primarily those within Europe’s Jewish communities, the exit contained a slight and brief open crack for some.

During that year, two legislators in the U.S. Congress, Senator Robert F. Wagner (D-NY) and Representative Edith Rogers (R-MA) proposed an emergency bill, which, if passed, would have increased the immigration quota by allowing an additional 20,000 Jewish children under the age of 14 (10,000 in 1939, and another 10,000 in 1940) from Nazi Germany to come to the United States.

Though the bill was roundly supported by religious and labor organizations, conservative and isolationist groups mounted wide scale campaigns to prevent its passage. Public opinion polls at the time showed that 83% of U.S. residents opposed any increases in immigration. Though First Lady, Eleanor Roosevelt, implored her husband to advance the bill, President Franklin Delano Roosevelt failed to publicly support it.

In fact, Laura Delano Houghteling, the president’s cousin and wife of the U.S. Commissioner of Immigration, James L. Houghteling, sternly warned: “20,000 charming children would all too soon, grow into 20,000 ugly adults.”

The bill never came up for a full vote in the Congress, and it died, like the children it could have saved.

Also in 1939, on May 13, 937 Germans and other citizens from Eastern European nations, mostly all Jews fleeing Nazis brutality, booked passage on the German transatlantic ocean liner, St. Louis, from the port of Hamburg bound for Havana, Cuba.

Most passengers had applied for U.S. visas, and they planned to wait in Cuba on their previously-approved landing permits and temporary transit visas until U.S. officials accepted them into the U.S.

Even before embarking from Germany, the passengers’ became the source of bitter political cross-partisan rivalries in Cuba as a number of conservative politicians and newspapers demanded the immediate cessation of its policy of admitting Jewish refugees on its land. The Cuban government, therefore, reneged on its offer to honor the passengers’ landing permits when the St. Louis entered Cuban waters.

Faced with this unforeseen development, the ship’s captain, Gustav Schroeder, turned the St. Louis toward the Florida coast of the United States in hopes that U.S. government officials would allow passengers entry on refugee status by processing their visa applications.

Unfortunately, though, the political wars transpiring in Cuba on the plight of Jewish refugees were even more intense in the United States. Within the United States, President Roosevelt succumbed to conservative political pressure by following his immigration officials’ decision to deny safe haven to the ship’s passengers.

The captain had no other choice than to turn his ship around back toward Europe. On route, knowing that returning to Germany meant certain death for his passengers, he negotiated with a number of governments, whereby Great Britain allowed entry of 288, the Netherlands admitted 181, Belgium took 214, and France took 224.

By the end of the war, the U.S. Holocaust Memorial Museum estimates that all but one in Great Britain survived, approximately half of the remainder on the continent, 278, survived the Holocaust, and 254 died: 84 who had been in Belgium; 84 in Holland, and 86 who had been admitted to France.

Throughout U.S. history, rather than characterizing refugees in humanitarian terms, many conservative and nationalist activists use narratives representing refugees as invading hoards who, if allowed to enter, will destroy the glorious civilization we have established among the “lesser” nations of the Earth.

However, today the United States stands as one of the most culturally and religiously diverse countries in the world. This diversity poses great challenges and great opportunities. The way we meet these challenges will determine whether we remain on the abyss of our history or whether we can truly achieve our promise of becoming a shining beacon to the world.