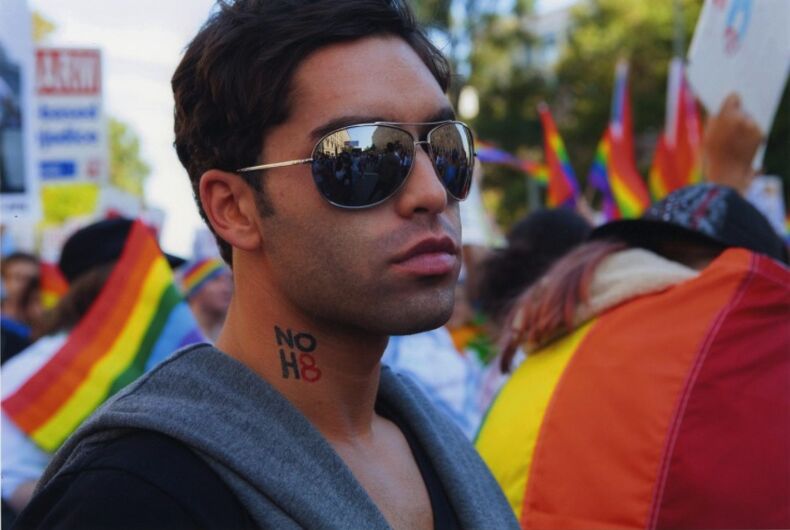 Pride is part protest, and hundreds of thousands marched on Washington, D.C., on Coming Out Day, Oct. 11, 2009.

Fueling the National Equality March was the demand that President Barack Obama fulfill his promise to allow LGBTQ people to serve openly in the military. Also driving the march was outrage over passage of California’s Proposition 8, on Nov. 4, 2008. The measure eliminated the rights of same-sex couples there to marry.

The NoH8 logo, on the neck of this protester, was the symbol of a national campaign, a silent photographic protest of celebrity photographer Adam Bouska and partner Jeff Parshley. Subjects had the logo on a cheek and duct tape on their mouths — a protest on how Prop 8 silenced them.

Joining the campaign was a celebrity lineup that ranged from Lance Bass to Weird Al Yankovic, and even Republican mother/daughter duo Cindy and Meghan McCain.

Don’t Ask, Don’t Tell had lingered from the presidency of Bill Clinton, who reneged on his campaign promise to allow gays to serve openly in the military. When conservatives rebelled against his proposal, this policy was his compromise, in 1993. But it made the situation even worse for members of the service, faced with undercover stings and “military justice.” More than 13,000 were discharged, and even more chose not to reenlist.

Presidential candidate Barack Obama made the same campaign promise as as Clinton. Yet days after his 2009 inauguration, Obama, too, dithered. Later that year, this October 2009 National Equality March placed a large spotlight on the issue.

The protest gained traction, and Don’t Ask, Don’t Tell did die. Legislation eventually passed both houses of Congress in December 2010, and Obama signed the law on Dec. 22.

LGBTQ teens who aren’t out engage with social media less