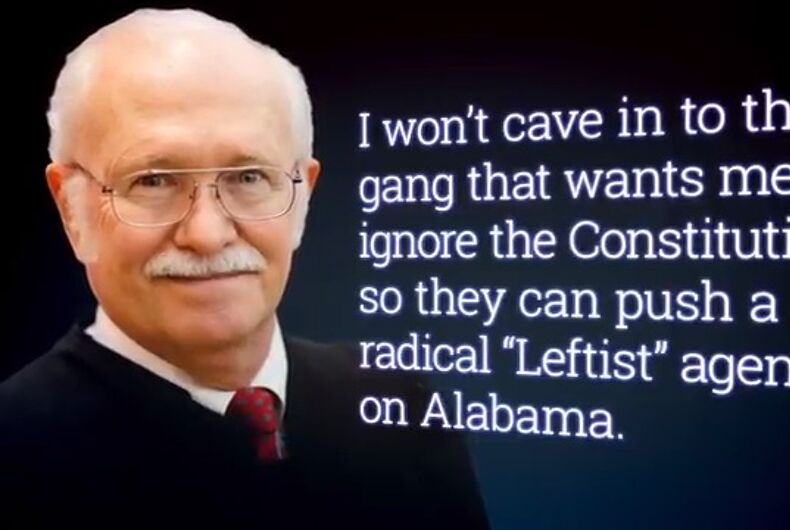 Roy Moore lost his job on the Alabama Supreme Court for the second time for refusing to acknowledge the Supreme Court’s decision legalizing marriage equality. If it wasn’t for that little pedophilia problem, Moore might have ridden his martyrdom to a Senate seat.

But Moore’s departure doesn’t mean that the Alabama judiciary has given up on undermining the law. Now another state Supreme Court justice is mapping out plans to undo marriage equality not just in Alabama but nationally.

Tom Parker, who is also the Republican nominee for the court’s Chief Justice, is promising to set up a pipeline of cases to the U.S. Supreme Court that will overturn the Obergefell decision, as well as Roe v. Wade.

Appearing on Wallbuilders Live radio, Parker said he wants to pick the case that leads to the end of marriage equality.

“President Trump is just one appointment away from giving us a conservative majority on the U.S. Supreme Court and they are going to need cases that they can use to reverse those horrible decisions of the liberal majority in the past that have undermined the Constitution and really just abused our own personal rights,” Parker said.

“Those types of decisions are really only going to come from state supreme courts because the federal courts have to follow that federal precedent, whereas I, as a state judge, am sworn to uphold the [state] constitution,” Parker added.

“We have written decisions that are contrary to Roe v. Wade, or I’ve written extensively about the judicial overreach in the Obergefell decision, and it is going to be writings like that that the new majority can use to restore what our Founding Fathers intended for America to be.”

Parker’s choice of Wallbuilders for his comments is entirely appropriate. The group is the brainchild of David Barton, a self-styled historian who would love to see America become a theocracy. He is, of course, much respected in Republican circles.

Parker won his primary battle earlier this month by positioning himself as the new Roy Moore, whom he admires. Like Moore, he has made opposition to marriage equality a cornerstone of his political identity.

In 2016, he speculated about the need for a state supreme court to say no to the Supreme Court ruling. “Resisting that decision could maybe start a revival of what we need in this country to return to our original founding principles,” Parker said.

In general, Parker is exactly what you think he is. He once handed out confederate flags at a funeral, while flanked by white supremacists. He compared a federal judge who supported marriage equality to a terrorist.

Resisting the Supreme Court ruling is what got Moore canned. Parker is trying a more subtle approach, trying to set the precedent that a more conservative U.S. Supreme Court will uphold. That way he’ll get to keep his job. Which, by the way, as the Republican nominee, he’s all but guaranteed to get this fall.